Taking Pride in the movement 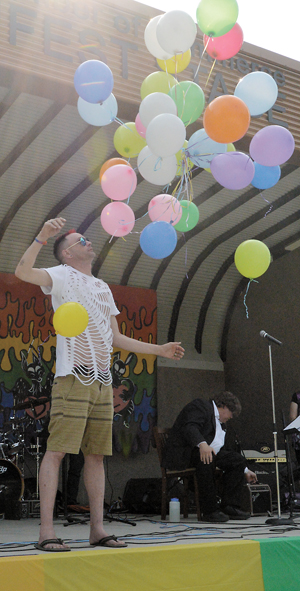 DAY OF PROTEST AND CELEBRATION: After a moment of silence to remember the victims of hate crime violence in the LGBTQ+ community, master of ceremonies Ryan Broadfoot releases a batch of bio-degradable balloons off the Cornfest Stage. TIMES PHOTO BY GREG PRICE

Another Taber Pride has come and gone, and with it greater awareness of the LGBTQ+ community.

Having just finished its third year, the Pride Day has made inroads to greater acceptance in the community, but still has a ways to go where its speed has resembled the tortoise more than the hare — but then, we all know how that story ended for the better.

There is no doubt about it, Taber has started something in small town, rural Alberta that is being noticed for the better and the worse, not only in Alberta, but the nation as well.

To say the Pride movement in Taber over the last few years has not met some detractors in the process would be an understatement.
Even allowing the Pride flag period at first in Taber was like pulling teeth, only passing by the slimmest of 4-3 votes back in 2017, with dissenting councilors quite vocal in their opposition, wanting their vote recorded. A burning of the flag by vandals that same year had council rescinding its flag protocol bylaw in 2018, not allowing the Pride flag to be flown on any town-owned flag pole.

This despite a history of Taber being in the minority, with Pride flags flown officially at numerous police stations, municipalities, colleges/universities, military bases and even on Parliament Hill in Ottawa.

The burning of the Pride flag was not designated as a hate crime at the time which begs the question, with so many ample flags flying around the Taber area late at night, ripe for similar shenanigans of ‘random’ vandalism, it was just mere coincidence the Pride flag was targeted?

Complaints emerged in the second year that the NDP was using security to guard the Pride flag when it was switched to the Provincial Building, almost implying it was the Taber Equality Alliance’s fault for wasting taxpayers dollars, even though they made no such request. I was baffled by the logic. Shouldn’t it be the arsonists one should be angry at in the need to pay for security?

Rumblings exist even today of mantras of ‘why can’t they just fit in’, as if simply celebrating one day out of the year, and raising awareness on several issues, is somehow taking away the collective as a whole. There seems to be no such other request for ‘fitting in’ with the numerous other incidences in which we make a point of celebrating our diversity, except for the Pride Day.

And to be honest, has there ever been a major social movement that has progressed for the better with an attitude of ‘fitting in’ (worker’s rights, segregation, body autonomy, women’s right to vote)?

Christianity has had its fair share of persecution over the years in the history books, fleeing other countries for more understanding lands, which I find ironic that now some (not all), use that belief system to try and deny another person’s rights, or view their existence as sub-standard.

Speaking of that, this year’s Pride celebration had a cloud hovering over it from an online petition from ‘Alberta Citizen’ (because of course they couldn’t use their real name in the conviction of their beliefs), citing religious scripture as to why the Pride flag should not be allowed to fly at the provincial building.

But despite all this, the Taber Equality Alliance has soldiered on in delivering Pride to the community and people are taking notice. Cardston held its very first Pride last year and it looks like Fort Macleod will be having its first ever celebration on Aug. 10. With some of these smaller communities having Pride celebrations emerge, one has to wonder if it is Taber that provided the inspiration.

While many used fake names in explaining their rationale in wanting to denounce the Pride flag being allowed at the Provincial Building with an online petition, a counter petition emerged with even more names, with each person quite willing to use their real identity in their rationale.

This year, the Town of Taber advertised the Pride event on their digital sign and lent a hand with some labour, helping set up the barriers for the beer gardens. According to a member of the Taber Equality Alliance, the Heritage Inn advertised the event on their digital sign as well, without any prompting by the group. Talking about corporate support, the Oilmen’s Club ran a Pride Trivia the night before Pride and committed to sponsoring the beer gardens this year and in the future.

New food trucks and performers to this year’s Pride were quite thrilled to be at the event and have promised to return.

These are all things that would have probably have seemed unfathomable from Pride’s tough beginnings back in 2017, where in 2019, crowds have grown in the three years, as forward progress has been shown.

But, when it comes to the LGBTQ+ movement in which some naively say we are all equal, it is simply not the case. There are countries where one’s simple existence means death. A country over, in the United States, the Department of Health and Human Services (HHS) announced a final version of a regulation that would allow medical providers to cite their personal beliefs in refusing to provide a broad spectrum of services — including lifesaving care for LGBTQ patients. Conversion therapy is still technically legal in this province, and the fight continues for privacy provisions with Gay/Straight Alliances for vulnerable youth. A parent of a transgender resident here in Taber told me that when she showed up to the out-of-town hospital where the reassignment procedure was being done, for support, she was told she was in the vast minority, where very often parents are not there for their child when they make that decision in their adulthood.

There are some in this town where the sight of two people of the same sex holding hands is seen as unsettling compared to those doing the same thing of opposite genders.

There is still progress to be made, but for the Taber Equality Alliance, with each Pride event they organize, steps are moving forward every single time.