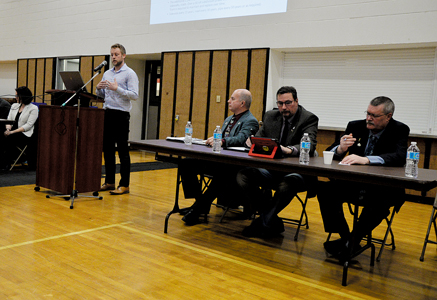 For those who are living under a rock given how it is an issue that has dominated the headlines locally, the Town of Taber held an open house on a proposed emergency services building, and the progress administration/town council has made on the issue last week.

First kudos to council, fire department personnel and administration for holding the event. Given how fiery the topic has been, the group knew it was not going to be the most pleasant experience and held it anyway. And kudos to the public itself for taking an interest with many attending the event at the Taber Community Centre, given past open houses have taken a ghost town feel to it.

I myself was going to ask some questions at the open house, but one was answered by former mayor Henk DeVlieger in his inquiry and also, given that the newspaper was going to be covering the event, I did not want the paper to be part of the story and so I decided to sit down after waiting in line during question period.

Nevertheless, given it’s my turn in the column rotation this week, there are still things from the open house and the process leading up to the open house that still leave questions.

TRANSPARENCY: It’s human nature, if you discuss something behind closed doors frequently, it gives off the optics you have something to hide.

Right from the very start, the idea of a new fire hall/emergency services building after the latest study has been discussed predominately in closed session, including earmarking public money towards the project on how best to use money from the estate of a local benefactor who passed away in 2016. I was given the reasoning it was a legal matter by a former town councillor. Yes, transferring the funds over from the estate to the town involves legalese. Once that money is transferred to the town, it is public money and thus of public interest in which people are entitled to know the dialogue/reasoning of administration and town council of how they arrived at the decision to set aside $1.5 million dollars of the donation for the fire hall. Once the legal matter was resolved, council should be reverting back to open session. According to the Feb. 12 agenda with minutes included from the Feb. 5 meeting, one or more councillors inquired why an agenda item (9A) was being held in closed session. Two petitions (Sept. 2017/Nov. 2107) were presented to town council and it took until Feb. 12’s meeting to finally take three contentious locations off the board, with the convenient timing of 24 hours before the open house? Why is discussion involving three pieces of land that are already owned by the town being discussed in closed session according to the Feb. 12 agenda package? I thought only land that is being discussed by the town that is not under their control was an in-camera topic and even at that, several suggested spots that are not owned by the town were released to the public at the open house 24 hours after the closed session. However one sits on the topic of the need of a new emergency services building, if it is something the town really thinks it needs, own it and stop with all the secrecy under some extremely loose interpretation under the Freedom of Information and Protection of Privacy Act.

GUARANTEES: I sensed hesitation by some people making comments/asking questions at the open house of if a new, centralized emergency services building will deliver the desired effect of increased economic development in town that seemed to be the biggest thrust the open house was trying to push. Estimations of a centralized fire hall has the input costs of building houses being lowered by between approximately $10,000-$20,000 to align with HIRF requirements identifying a need for fire departments to respond in under 10 minutes more than 90 per cent of the time. Towns with fire departments unable to achieve this threshold within their response areas would require new buildings to have sprinkler systems installed, increased setbacks or have higher-quality materials. There are no guarantees in life, but as I’ve heard on word on the street, what is stopping developers from simply pocketing the difference in the construction price and keeping their selling price point the same? Offsite levies can help pay for the fire hall, but then won’t those extra costs be baked into the selling price of new homes? That has certainly been the argument against raising the minimum wage, then does that not apply to private business in land developers? If you raise input costs to developers, it gets passed down to the consumer who purchases the housing. If so, dreams of attainable/affordable housing are in theory only and not being exercised in reality, although a couple of recent developments look promising I’ve seen going up in Taber at certain price points. If price points remain the same in affected future developments with no discounts, in essence does that not mean you are giving a tax-aided subsidy to land developers lowering their input costs?

LONG-TERM COST ANALYSIS: There are no certainties in life and so the $2.5 million cost estimate of a new fire hall is just that — an estimate, could be lower, could be higher. One thing is for certain, the price quoted at the open house did not include any potential land purchase for a new emergency services building, something that looks more likely now that three town-owned pieces of land have been taken out of the equation after pressure from petitions. There is also of course long-term costs of maintenance of the building over its life span (as applies with the current building as well). Depending on how much money is secured through offsite levies to offset costs to the taxpayer, the taxpayer is still going to have to pay some portion. If the town is planning on taking out a debenture to cover whatever won’t be covered by off-site levies/donations/grants for a new emergency services building, those costs will be factored into one’s property taxes. If factoring in the long-term costs of a new fire hall starts building towards equaling, nearing or going over the one-time costs of say sprinkler systems, architectural changes etc. (which can also lower house insurance costs for the consumer) as required under HIRF if you don’t meet the 10-minute response time, is the town resident any further ahead in their personal cost if your desire is attainable housing to spurn on growth?

10-MINUTE RULE EXEMPTION: At the open house a graph was shown of how response time is composed of five time components…9-1-1 call answered, downstream to fire department, chute time, travel time and set-up time. But Government of Alberta documentation states in its 10-minute rule exemption, ‘The wording of the requirement in previous versions of the Alberta Building Code left the start and end times of the 10-minute rule open to interpretation. With the coming into force of Building Code Amendment Regulation (AR/2009) on May 3, 2009, the timeframe for calculation was clarified as being from the time of receipt of a fire alarm by the fire department to the point at which a fire department vehicle capable of beginning fire suppression activities (typically a pumper truck with houses and a crew) arrives at the scene of incident. There is no mention of set-up time included in the 10-minute HIRF rule as was presented to the public at the open house, just ‘arrives at the scene of the incident’ as the end point. I have no idea how long set-up time takes for highly skilled members of the Taber Fire Department, but how much does that affect the ratio?

END RESULT: Numbers were bantered about at the presentation and in some discussion afterwards with Taberites with what was attainable/affordable housing. The number of $250,000-$300,000 seem to be the common price point. I did a real estate search this past week on the Internet and there seemed to be plenty of residences available at that price point or lower. But to be fair, if I have a choice between a brand-new unit at a certain price point and something that has decades of life on it with maintenance needed at the same price point, I’m picking the brand-new development every time.

OPTIONS: There is no doubt about it, volunteer fire fighter services have some tough expectations under HIRF to achieve its 10-minute threshold 90 per cent of the time. Talking with one of the members of council, is fighting to have that policy altered provincially attainable? Should we be comparing apples with oranges when it comes to full-time fire services and on-call volunteer fire fighting services. Is it fair that both have the same expectations of large urban fire-fighting services and small rural ones?

FULL HOUSE: Once again, kudos to administration, town council/mayor, and fire chief Steve Munshaw for holding the open house to address people that were both positive and negative towards the formation of a new emergency services building. It wasn’t the easiest thing to do.

Given the topic has dominated conversation from the day inherited money would be earmarked for the project to October’s election forum, to plenty of discussion featured in the pages of the Taber Times, and coffee breaks in many a restaurant, it has been made abundantly clear there are no easy answers of where a new emergency services building should go, or if we even need one in the first place.