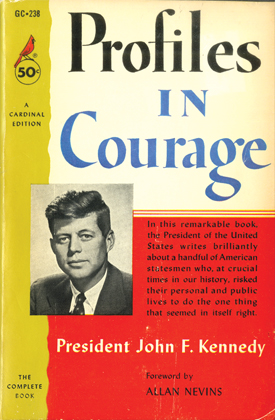 Haunting the used book stores, library sales, and every dark alley in between where garage-door capitalism still flourishes, one must be prepared to wade through stack upon stack of creased, cracked, dog-eared books stained with evidence of the habits and propensities of their former owners before ever coming across that one literary gem among collections of more dubious importance to posterity.

Very occasionally, one seizes upon a find that is actually worthy of taking its place among one’s permanent private collection, rather than relegated back into general circulation, hardly having justified their loonie price tag. But these are admittedly more few and far between.

Still, it is the search that inspires us, and the classics I have liberated over the years are not insubstantial. For people who may take book collecting to the next level, where first and second editions are the coveted prizes, browsing the garage sales and unreputable dealers with a dogged determination will eventually pay dividends. It takes a sharp eye, but in many cases sellers have no idea what they have. Books that have landed in my possession over the years for a mere pittance include a good quality first edition of Rendezvous with Rama (1973) by Arthur C. Clarke, an almost untouched first edition of The Terminal Man (1972) by Michael Crichton, and a somewhat worse for wear first edition of The Man Who Fell to Earth (1963) by Walter Tevis, among others, all of which might entitle a seller to a few hundred dollars from a motivated collector.

But by far my greatest prize, however, is a near-pristine first edition of The Old Man and the Sea (1952) by Ernest Hemingway. First editions of a Hemingway opus can sometimes retail for startling sums, but usually hover in the four to five figure range for an exceptional example. Unfortunately my edition is missing its dust jacket, has a few other minor flaws, and is of course unsigned, which probably relegates it firmly into the mid-to-low four figures. All in all, though, it was definitely time well spent at that book sale. I think I payed a $1.25 for it.

But a book should never be judged on its cover, and by association, by its estimated value. In most cases the true value of a work or novel lies inside its pages, not by what someone might be willing to pay for it. Which brings me to one of my more recent acquisitions. Although not particularly valuable — being an early 1960s paperback edition — the wealth of critical analysis contained within it is a true hidden treasure, and extremely prescient to today’s prevailing political situation in the United States. I’m referring to Profiles in Courage (1956) written by a fledgling politician from Massachusetts, then-Senator John F. Kennedy, later to ascend to the presidency in 1960.

With the years of his presidency and all the later tragic events surrounding Kennedy that eventually culminated in his assassination in November 1963, it has largely overshadowed his career on the floor of the Senate chamber that preceded it, and included among that is the fact that he decided to pen a series of essays or case studies on historical American politicians that resonated with his vision of exceptional public service and duty to the state.

Fascinating considering how Kennedy is regarded today — as a politician who didn’t often yield to pressure and followed his own conscience in his monumental actions and decisions — these are the very individuals in American political history Kennedy chose to explore, extol and investigate, and it isn’t a stretch to believe that some of these individuals were true personal heroes to the president during his all-too-brief administration. The insight these profiles deliver into the shaping of his character when he later became president are a resource that isn’t often afforded to the masses by every world leader. Profiles in Courage is literally a blueprint for the Kennedy ethos and the individuals that made up his cabinet that was later nicknamed “Camelot” after legendary King Arthur’s semi-mythical utopian kingdom.

Profiles in Courage focuses not always on the famous or infamous, the popular statesman or the pompous and powerful. Instead, it often explores the more obscure politicians who in many cases have been lost to history, forgotten for their great contribution, who at crucial times in American history risked their personal and public lives to do the one thing that seemed in itself to be right.

Profiled are John Quincy Adams, who lost his Senate seat and was repudiated in Boston for support of his father’s enemy, Thomas Jefferson. There is Sam Houston, whose political courage in fighting against the secession from the Union of his beloved state of Texas left him a virtual pariah to his own people; Edmund Ross, whose single vote saved President Johnson from impeachment despite overwhelming pressure and later condemnation that ended his political career, among many others.

The one redeeming character trait shared by all was indeed courage, to do what an individual should despite personal consequences. All come from widely varying backgrounds, and were politicians of various political and regional alliances, but they all chose to act in defence of the nation or preservation of the Union in critical moments, rather than retreat into sectarian infighting or allow themselves to be influenced from their conscience by the darker angels of our nature.

Kennedy’s writing style is far from the stiff senatorial diction one might expect, and is instead imbued with brilliant writing that arrests a reader’s attention. The essays are not written for the academic scholar, rather the layman, but this isn’t what draws a reader in. Remarkably, Kennedy manages in each case to drill down to the important message to be taken away from every example, and he states his viewpoint clearly and concisely. Every detail need not be known, or every date remembered, for a reader to clearly understand the importance of what is being imparted.

Reading the work in the light of modern American politics and the ascension of the Trump administration is a disturbing exploration, because the politicians that Kennedy holds up as examples of statesmanship are almost nowhere to be found in today’s Washington, something Kennedy — were he alive today — would probably condemn. It is a testament to the polarization and sheer nastiness of American politics in the 21st century that true statesmanship has almost become a dirty word in Washington, where ideology-driven policy and immigration phobia and prejudice seem to reign supreme in a nation that still purports to be the land of the free.

A fascinating journey into the character of a great American president which casts light on what might have factored in his administration’s later decisions, Profiles in Courage is also a disturbing retrospective of modern American politics seen through a lens from the past.