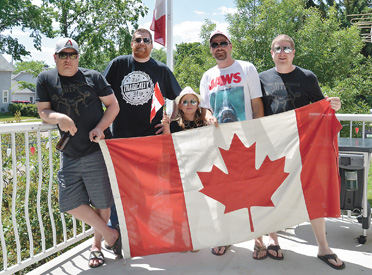 I’m not sure than anyone will be able to pin down just what Tragically Hip frontman Gord Downie represented to millions of Canadians from coast to coast. I’ve read the obituaries, the news stories, the outpourings from millions of heartbroken fans online, and while all of this has been a fitting memorial of sorts, touching on the broad strokes — his small town roots, the rise to national stardom, becoming “Canada’s” band, unparalleled live shows, his dedication to social causes — something, in the end, still seems to be missing.

What is missing, I think, is just what Downie meant personally to each of us that was touched by The Tragically Hip’s oddly-enthralling music over the years. Because Hip fans are legion, and even for those that were never really caught up in the Hip’s magic, who I remember complaining bitterly about the cadence of Downie’s voice, their dislike for the music and lyrics, or whatever else it was that made them a hater in the minority — you people know who you are — even those individuals were forced to accept that Downie and the Hip represented something truly unique in the annals of Canadian music. Whatever faults that could be identified, Downie and the Hip became a phenomenon, and that was something that even the bitterest enemy was eventually forced to acknowledge, however reluctantly.

I remember distinctly the first time I ever heard a song by The Tragically Hip, and what makes it more remarkable is that if you asked me the same question about the myriad number of other bands that have registered my attention in the intervening decades, there isn’t one that I could tell you exactly where I was and what I was doing the moment I heard the first track. Not so with The Tragically Hip.

In the early 1990s, I was dragged along as a young teenager on a summer trip with my family to the Northwest Territories, all of us trundled together haphazardly amidst our gear in a ’79 Dodge van — which Taberites can still catch a glimpse of bombing around with myself behind the wheel, although now a few more decades worse for wear. In those days, it wasn’t that uncommon to still encounter a vehicle that only sported an AM radio and a single 4″x10″ factory speaker, so needless to say, audio quality wasn’t exactly up to THX standards. A few days into our trip, on a hot afternoon with all windows open and the Highway 44 wind whistling north of Barrhead, an Edmonton disc jockey spun the track that would begin my long musical love affair with The Tragically Hip.

The track, of course, was “New Orleans is Sinking” from 1989’s LP Up to Here. Needless to say — perhaps for other fans from this era as well — I was hooked. Later, growing up on a farm in a rural area of southwestern Saskatchewan — where trips to the nearest record store were pointedly few and far between — to help me complete my fledgling collection of Hip cassettes, my go-to was that mail order service that captured so many people back in the 1980s and 1990s — Columbia House.

I’d be willing to wager that just brought a smile of reminiscence to the face of a few 30-somethings out there. That, or I just severely dated myself.

One of the things that Gord Downie did like almost no other was craft lyrics like a poet, but often coupled to contrasting humour. In many Hip tunes over the years, Downie often seemed to be on the verge of expressing something profound, but the following lines would sometimes tend to dispel this idea and leave you laughing. One of the great pastimes of Hip fans over the years has been endlessly discussing the lyrics of innumerable tunes to try to determine their “meaning”, such as “Scared” or “Nautical Disaster” from 1994’s Day for Night LP.

Here’s an example from “Scared,” for instance:

“You’re in Russia, amid more than a million works of art
Are whisked out to the woods
And when the Nazis find the whole place dark
They’ll think God’s left the museum for good”

Which I always thought might be reference to the evacuation of artwork from cities like St. Petersburg by the Soviet government in 1941, as advancing Nazi troops overran the country and the Red Army was in full retreat.

Or it could just be a flight of complete whimsy that sounded good together. Only Gord probably knows.

“Clearly entranced, you’re heading back now
Defanged destroyer limps into the bay
Down at the beach it’s attracting quite a crowd
As kids wade through the blood out to it to play”

A reference to the Allied convoys that shipped war material to Archangel and other Soviet Arctic ports during WWII (considering the earlier lyrics), or more completely meaningless sentences strung together? Or perhaps something else altogether?

You get the idea. And that’s only one example from one song, from one album. There are almost endless examples one could point to. Gord Downie was a lyrical genius, and studying the Hip’s songs in a search for meaning can be endlessly fascinating. And few songs didn’t have at least one reference to Canadiana, something that a Haligonian would recognize as easily as a Calgarian.

But in most cases, it wouldn’t be something an American might easily recognize, which brings us to another aspect of The Tragically Hip’s endearing charm: the fact that, try as they might early on in their careers, the Hip remained almost exclusively a Canadian band, and an almost wholly Canadian phenomenon. Never enjoying huge success south of the 49th parallel, by the mid-1990s it didn’t matter. Downie’s almost mythical live performances, the often soul-touching lyrics, and the ability for Canadians to lay claim to something that was ours was an infectious brew for millions.

It is a Canadian oddity that we sometimes love and celebrate things simply because they aren’t influenced or corrupted by the pop culture behemoth that straddles the U.S. If there was something that fit that bill for many Canadians, it was Gord Downie and The Tragically Hip.

Downie, unfortunately, is the quintessentially irreplaceable frontman. No one will be able to step into the those shoes, no Brian Johnson of AC/DC fame to take over for Bon Scott. And no one, I’m sure, would even want to try. Watching someone on a stage, aping Downie’s antics or attempting to reach his sometimes grating vocals, would be a profound disservice with aspects of grasping capitalism attached to it. I know — we know — that Downie’s farewell tour wasn’t just about himself. It was a farewell tour for The Tragically Hip. And when I think that I will never be able to purchase another new Hip album in my life, I feel sadness grip me in places you don’t always admit at parties. But that’s because the Hip almost always cut to the heart, and Downie wore his on his sleeve.

Watching the live broadcast of the final concert on CBC — which a few friends and I turned into a home concert party, complete with projector, which fellow journalist Greg Price immortalized in an award-winning column — it was remarkable to witness this individual, suffering from terminal cancer, performing with an energy that was hardly a reflection of his youthful vigor, but an affirmation of it.

It was something I won’t easily forget, along with millions of Canadians.

For those Canadians who just don’t get it, it’s understandable. Hip albums — especially their later music — almost always had the strange quality of needing multiple hearings before an album really began to grow on you. Some, perhaps, picked them up, listened once, and added it to the discard pile. For those who always gave it more than a few tries, Hip albums infect you. Sometimes obsessively to the point where you just can’t get it out of your head.

Not that I would want to.