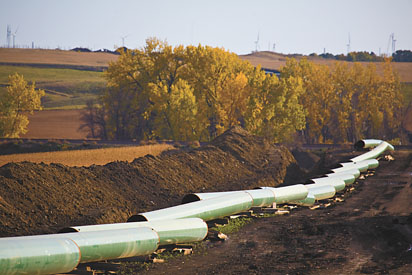 The ascension of an NDP-Green coalition next door in British Columbia wasn’t exactly the news Alberta was hoping to hear with regard to the Kinder-Morgan Trans Mountain Pipeline expansion.

The new coalition, which seeks to unseat Christy Clark’s formerly-ruling Liberals after a close-run election that saw that party miss a majority standing by only one seat, is vehemently opposed to the pipeline project and has vowed to try to block the endeavour through every means at its disposal.

Ideological viewpoints aside, and ignoring the high-level war of words that is already coalescing around Alberta Premier Rachel Notley and B.C. Green Party leader Andrew Weaver, it is still unclear how and by what means the coalition can block the project considering the federal government has already issued an approval.

But when it comes to the federal government making a choice between bringing the full sovereign brunt of its powers into play, or simply leaving recalcitrant western provinces to battle it out themselves in the courts or the arena of public opinion — nothing is ever that simple in Canada.

Diffusing this smoldering keg of gunpowder without destroying delicate interprovincial relationships or bringing to bear the hard and heavy arm of the federal government would be a balancing act of unprecedented proportions — if indeed a compromise can even be cobbled together that doesn’t leave one side of the debate seeing red considering the hardened viewpoints that have been expressed in recent days.

The dispute is now shaping up to be a major battleground between what is in the national interest in Canada, and what right provinces may have to refuse that interest if a majority of its people oppose a project or proposal — whatever it might be — on moral, scientific, or political grounds.

Now the federal Liberals are stuck with the possibility of having to actually exert Ottawa’s authority over an inter-provincial project.

Offering up federal approval in a low-risk political environment is one thing; being compelled to consider draconian action to force a province’s compliance in the face of stiff Indigenous and provincial opposition is something else altogether.

Not that Ottawa doesn’t have the authority. Canada’s Fathers of Confederation had witnessed what the excesses of decentralized state control could lead to in the bloody American Civil War, and when they signed on the dotted line only two years later to create a new North American nation, they were sure to invest the federal government with powers designed to always keep the provinces in check.

It has been so long since the federal government used some of its more obscure powers — such as declaratory power, or disallowance and reservation — that many Canadians have forgotten just how powerful our federal government was originally designed to be in the face of upstart provinces that might demand too much.

Disallowance and reservation, for instance, basically allows the federal government to arbitrarily quash any provincial legislation it sees fit. In former British possessions, these powers are now often considered to be politically obsolete, and in many cases have been formally abolished.

But in Canadian constitutional law, the powers of reservation and disallowance of both federal and provincial legislation still formally remain in place.

Alberta has been no stranger to the process, even in the relatively recent past. During the Depression, the federal government moved to strike down various laws of Alberta’s Social Credit government which had attempted to legislate in the clearly-defined federal powers of banking and currency. The last disallowance of a provincial law occurred in April 1943, in relation to prejudicial Alberta legislation restricting land sales regarding Hutterites and “enemy aliens.”

Declaratory power, on the other hand, is a different kettle of fish — and one that could have implications for our current inter-provincial pipeline dispute. In general terms, works declared by Parliament to be “for the general advantage of Canada” or “for the advantage of two or more of the provinces” are often part of the national infrastructure. Whenever Parliament invokes the power, it gains jurisdiction over the work and any necessarily incidental operations.

It could easily be argued — both legally and politically — that Kinder Morgan’s project falls under that definition.

But for almost 60 years, federal governments have been loath to invoke declaratory power. Dictating decisions to provinces and citizens is always bordering on a dangerous political faux pas, and can have potential implications for any ruling party at the ballot box.

The last time the power was invoked was in 1961, when the federal government moved to take over the administration of nuclear energy.

While powers like declaratory power have fallen into disuse in Canada, that doesn’t mean they no longer exist as part of the federal government’s tickle trunk to force a province’s hand, or cram an unwanted project down a province’s throat if it is deemed to be in the national interest. Certainly the optics are not ideal from a political perspective, and in a democratic system, the use of such powers can sometimes smack of a subversion of the people’s right to decide for themselves.

But for the federal government to sit back and do nothing in the face of provincial defiance of their professed goals — an interest that has already been declared to be vital to the nation as a whole — will only further erode the federal government’s authority and open the door for more provinces to increasingly challenge Ottawa regarding any number of projects that might be in the national interest.

While provinces should still retain the right to oppose Ottawa’s will — think Trudeau Sr.’s National Energy Program, for instance — they should not be permitted to totally block any project that has been declared to be in the national interest.

If the federal government had not had this ability in the past, the nation would not have a national railway or highway system, among many other national benefits.