Groundhog system may need to be re-examined 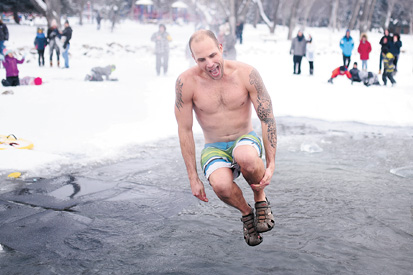 This next Monday is supposed to be the first day of spring. Given the amount of snow on the ground, I would have guessed it was still January.

This past winter was a bit of a doozy.

Yes, the chinooks were wonderful, as always, but the moment they went away it was right back down to -20 degrees, and that was the midday temperature.

I was told that this was an unusually cold winter. Given that last winter was fairly pleasant and how rainy and warm the summer was, it must be natural to have a cold spell right after. Still, did Mother Nature really have to turn the thermostat down to -30 at night? It was like she got hit with a carbon tax too and wanted to save money on her heating bills.

But last month, supposedly, all the celebrity groundhogs in Canada predicted an early spring.

This, along with the fact several weather forecasts are predicting above freezing temperatures for the next week, gives me hope that, despite this past weekend’s snowfall, spring is indeed on its way.

While winter is indeed a very lovely season, this past winter has been just a bit too wintery.

I want to be able to throw open my windows and smell flowers, not huddle under blankets while we endure yet another snow fall.

I think we can all agree that yes, shoveling is indeed overrated, no matter how wonderful of a workout it can be.

And if you are like me, winter can also inspire you to be lazy. With the short daylight hours and the cold, it really doesn’t seem so important to go for a walk or do crunches when you can cuddle into the corner of your couch with a cup of hot something instead.

Adding that wintertime is also the time of comfort — read, unhealthy option — food, generally because they tend to be hot, it can be a bit of a double whammy. Because unless you love roasted red pepper soup, it tends to be carb-loaded. Not that it’s a bad thing, mainly because it tastes great, even if all the doctors and nutritionists reading this are cringing, but the leafy green stuff that is good for you tends to fall on the wayside while you dig into countless pasta dishes.

Winter is also the blah-est of season. As spring has it green growth, summer the bright sun and autumn the colourful leaves, winter, with its snow and slumbering trees, is practically devoid of colour. And even the once pristine white snow turns grey once dirt and other things start getting stomped into it.

Yes, lights are pretty, but we’re the ones who put them up.

Although winter has its low points, there are also some good ones. Winter is home to holidays such as Christmas, Hanukkah, New Year’s Eve, Chinese New Year and Valentine’s Day. Winter is home to one of the official sports of Canada, hockey — although let’s face it, we can play it anytime of year, but it’s that much better in winter. Winter also brings us snow days, and if it weren’t for winter, would there even be gingerbread lattes?

Winter will be missed, but after three months of dark and cold, it will be a relief to be warm outside again. Although in mid-summer, when the weather is 35 degrees and the sun is blasting us, we will probably wish for colder temperatures again.

So long winter; until we meet again in December. But right now, bring on spring!