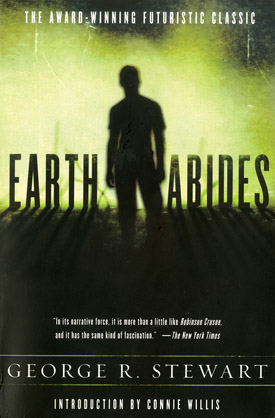 For most of us, the idea of apocalypse is frightening. Whether by fire or flood, war or pestilence, the idea that human society — that over-polluting, over-confident, arrogant, greedy, apathetic, hateful and violent entity known as man — could disappear entirely from the face of the earth is almost anathema to a plugged-in, electronically-infected populace that believes, like all others that have come before them, that their collapse is impossible.

It is easy to forget the fragility of the world we live in, or the fragility of the human condition. We can conceive of disaster because we have witnessed disaster, and have identified threats that we now face globally, and are attempting to address those threats with varying degrees of success. But if life — and recorded history — teaches us anything, we must always be willing to accept the unexpected.

We face difficulty in preparing for anything that is not previously anticipated, or cannot be predicted. We can prepare for what we know, but it is a much more difficult task to prepare for what we don’t. That, in essence, is why we fear apocalypse — it is the personification of the unknown. And it potentially carries with it the disintegration of everything that we hold familiar — rules, laws, morals, social structure — all comes crashing down.

The irony is this inevitability is what is so fascinating about the idea of apocalypse to survivalists and preppers and more mainstream citizens alike, that through violence, destruction and death might come rebirth, a new society rising from the ashes like a mythical Phoenix to be shaped in whatever design survivors might choose.

Remaking an entire society from the ground up, to bend the world to a single will or wills, is an incredibly powerful image that holds touches of the God-like in its inception — we may not be Gods, but the possibility of wielding such immense power to re-create the world is as close as any of us might come to knowing the mind of God.

While we may dream of the possibilities of apocalypse, we must also be willing to acknowledge that many of these themes are impossibly romantic in a realistic world, even if that world has collapsed under some unknown disaster or virtual extinction event. This is one of the key themes of author George R. Stewart’s award-winning post-apocalyptic masterpiece Earth Abides (1949), where the hopes and dreams of a handful of survivors for the society that follows a mass pandemic are realistically shattered when romantic ideals begin to prove unworkable.

An historian, typonymist, novelist and English professor at the University of California – Berkeley, during his lifetime Stewart gained early prominence for his treatment of natural forces as an anthropomorphized character, such as Storm (1941) and Fire (1948), which deftly employ the idea of the antagonist as a natural force with almost human qualities, overwhelming and influencing the world of humanity. Upon its publication in 1949, Earth Abides was the first-ever winner of the International Fantasy Award, while its name comes from the Bible, Ecclesiastes 1:4, “Men come and go, but earth abides”.

Earth Abides is often many different things to many different readers. On the surface of it a novel about a mass pandemic and the struggle of the society that comes after it, in other ways the novel can be viewed as an adventure story, a journey, a tragedy, even an anthropological study, rather than just a “disaster novel.”

Vividly and convincingly descriptive of a deteriorating world now bereft of man, many passages will stay with a reader long after they have finished reading it. In the early chapters of the novel, Stewart’s main character — Isherwood, or “Ish” — traverses what has become a wasteland America, more to bear witness to the disaster and its effects than in search of other survivors — an idea which, we shall see, becomes more central to the novel’s plot as it approaches the climax.

There is some certainty that the character of Ish is based on the real-life account of Ishi, a Yahi Indian and the last of his primitive tribe who hiked out of the California mountains in 1911 to be confronted by a modern world. The story of Stewart’s fictional Ish is told in reverse, but it contains all the power, gravity and sadness than can accompany the destruction of a culture.

In one of the main themes of Earth Abides, Stewart argues that in any post-apocalyptic situation, survivors will be faced with a critical choice — to become a true survivor, now and into the future, or to follow the sterile path of the lonely observer who is only interested in witnessing what has come to pass.

There will always be those who simply cannot come to terms with the fact that everything they now know has disappeared forever, asserts Stewart, and the psychological impacts of such a realization could be violent and unpredictable.

On the heels of this idea comes Earth Abides’ central message, that an attempt to impart the lessons of a vanished world to a new population — the descendants of survivors — that have no conception of the world that came before it, at least as we know it, is almost an impossible task.
Those who would come after us in such a world might look upon a freeway interchange, for example — a modern monstrosity of concrete and asphalt — and marvel on the engineering accomplishments of the “old ones.”

But it would be much more difficult — impossible even — for someone who has never witnessed such a spectacle to imagine it full of speeding automobiles all honking, screeching and coughing towards their respective destinations. We can conceive, because we have seen. But for those who have never seen it or witnessed it? Try explaining the airplane, electricity, even the light bulb. Try explaining the Internet, cellphones, television, radio. Just because we have seen and witnessed such things, doesn’t mean we wouldn’t be looked on like madmen by the children of such a world.
Early on in the novel, Stewart’s main character, Ish, is the embodiment of modern romantic thought about shaping a post-apocalyptic society.

To his astonishment, and eventual resignation, the society he in many ways helped sire takes on a barbarous life of its own. Not necessarily a negative life of its own, but an uneducated savagery takes hold over which Ish has no power to control or mitigate as the years slip by and he passes into senility.

Stewart’s motivation in this is an attempt to prove that while the survivors of a disaster are the last links to a vanished world, their descendants will have no such ties. As the “Last American” Ish is held in reverence by his stoic, Indian-style descendants, but they can’t or won’t believe in his fantastical tales about information that comes from the air and can be seen and heard on little boxes (television), people who speak from boxes (radio), glass pears that bottle the sun (light bulbs), or the thousand other devices that society has gifted us. Without the power of experience — to see, to feel, to hear — the society we know and understand and take for granted might as well be 1,000 years removed from these individuals, rather than just a few decades.

Earth Abides has sometimes been compared with Herman Melville’s masterpiece, Moby-Dick (1851). The comparison is entirely apt. Like Ahab, Ish’s white whale is the society he hopes to build, the wisdom and education he hopes to impart to his descendants, his dream that the better parts of the world he once knew should not vanish forever. His tragedy — indeed, the tragedy of most post-apocalyptic fiction, at least from Stewart’s perspective — is the impossibility of such a dream.

In this, Ish is not unlike another famous literary figure, Percy Bysshe Shelley, whose famous sonnet Ozymandias (1818) explores the fate of history and the ravages of time: that all prominent figures and the empires that they build are impermanent and their legacies fated to decay into oblivion. As he watches the world he attempted to build morph into something entirely foreign and ultimately unique — Ish has become Ozymandias: “Look on my works, ye Mighty, and despair!”

A fascinating exploration of the sociological and anthropological questions raised by the survivors of an extinction-level event, Earth Abides is part adventure fiction, part tragedy, part moral treatise as it attempts to navigate the waters of survivalist romanticism to dispel the mythology of the “cozy catastrophy.”