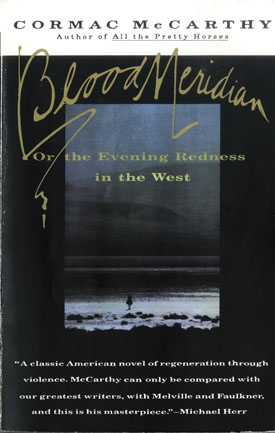 There are few novels that depict the struggle for the American West of the 19th century that are as graphically and unrelentingly violent as Cormac McCarthy’s modern classic Blood Meridian, Or the Evening Redness in the West (1985). And while the pages certainly drip blood like a charnel house filled to the brim with macabre and grotesque imagery, Blood Meridian is much more than a pedestrian work filled with cheap thrills and clichéd Western symbolism; rather, it is an opus both dark and brooding, with a culminating sense of moral ambiguity and outright evil embodied in the mysterious and terrifying character of Judge Holden.

When first published in 1985, what many now consider to be McCarthy’s crowning achievement opened to mixed reviews from critics, and it was largely forgotten. In the ensuing years, however, the work has taken on an almost mythical following among some American scholars and critics, some of whom consider it to be the finest piece of literature penned by an American author in the 20th century. There are few lists of the best 100 novels of the 20th century which do not now contain Blood Meridian. Strange then that McCarthy is more widely known for some of his popular later works, such as No Country for Old Men (2005) or the post-apocalyptic The Road (2006), both of which have since been adapted as major Hollywood films.

So what, then, sets Blood Meridian apart from the literally thousands of novels that have depicted the American West? The answer is not easy to discern. A story seemingly centered on the character of The Kid, a teenage drifter who falls in with a gang of thoroughly bad characters, who treat murder and all manner of depravity as the ordinary business of an ordinary day, Blood Meridian is in one sense a descent into a world where death, violence and anti-values have replaced the moral pillars that define most just societies.

Actually based on violent historical events that took place in the United States-Mexico borderlands in 1849-1850, Blood Meridian is a fictionalization of the Glanton Gang, a group of bloodthirsty killers and outlaws who hunt scalps for bounty by massacring Native Americans. Never holding back in his descriptive powers, readers should be forewarned before encountering a multitude of scenes from the novel which depict in excruciating detail the wholesale slaughter of huge numbers of Native Americans, graphic descriptions of scalpings and murder — and just to give the reader an idea what they might be getting themselves into, before even reaching a triple-digit page count you will bear witness to one of the more disturbing depictions in modern fiction — a tree festooned with the corpses of murdered infants.

Not exactly a Saturday afternoon in the park. While many characters seem to ascend and recede in prominence throughout Blood Meridian, with the notable exception of Glanton himself, Judge Holden and The Kid, this appears to be mere subterfuge on the part of McCarthy, whose main character (or supposedly main character) embodied in The Kid seems at times to be only a vehicle through which to watch the drama unfold through his eyes. The Kid makes few moral judgements about the horror he witnesses, and perhaps by design rarely relates his own participation in violent acts, but only the actions of others — even though we know he must be a willing participant in murder. It creates the perception that The Kid is somehow “good”, while we are naggingly aware that the opposite must certainly be so.

Interestingly, one of the more fascinating characters to be found in Blood Meridian is really not a character at all, at least in a strict literary sense. The landscape described by McCarthy through his towering prose and descriptive prowess is virtually anthropomorphized into a menacing presence throughout many of the passages in the novel.

This kind of literary device is not entirely uncommon, but not easily executed under the guidance of any average author. Some of the finest examples of this idea can be explored through the works of American writer George R. Stewart — author of the sweeping 1949 outbreak classic Earth Abides — whose earlier works, such as Storm (1941) and Fire (1948) deftly employ the idea of the antagonist as a natural force with almost human qualities, overwhelming and influencing the world of humanity.

While it might be considered surprising that McCarthy’s portrayal of Native Americans throughout his novel is not what one would describe as racially charitable, slaughtered as they are randomly and in such disturbing numbers, not to mention their unfavourable description and actions as penned by McCarthy in this butcher’s block classic. That being said, McCarthy’s gang of white mass murderers is hardly a beacon of civilization to be held up to the world as an example of progressive thought. When it comes to Blood Meridian, all races seem to be treated with equal distaste.

One of the oddities of McCarthy’s writing style, true to a greater or lesser degree in most of his novels, is his bizarre use of punctuation — specifically, in many cases, a lack there of. This is by design — McCarthy is a long-time believer in his own theories of minimalist punctuation, something of a latter-day E.E. Cummings, a poet made famous by his penchance for unconventional orthography. For the grammar Nazis, McCarthy may be exasperating, but for the casual reader less inclined toward rigid theories of grammatical righteousness, McCarthy’s prose just takes some getting used to. And once lost in that prose, grammatical peccadillos seem to fade with the turning of each passing page.

No review of Blood Meridian would be complete, however, without touching on the character of Judge Holden, known simply as the The Judge throughout most of the novel. From his mysterious first appearance, his almost (or real) supernatural characteristics, his grotesque size and albino appearance, the character is a mass of contradictions. The Judge is obviously well educated, but employed as a mass murderer. And while seemingly a pedophile, no one in this company of rogues seems to be too concerned about this. Deeper, though, the Judge is a metaphor for senseless violence and evil, but of meaning and symbolism as well. There are running debates among scholars and fans as to Holden’s true nature, supernatural or otherwise, or even if he is a representation of the Devil himself. McCarthy never draws conclusions for a reader — he simply tantalizes you with vague detail to inspire the imagination and lets the reader draw their own conclusions.

Blood Meridian is often considered to be an “anti-western”, as one of the main themes appears to be dispelling the myth of the American West as a place of John Wayne-style characters smiting the heathen foe or triumphing over the forces of the evil cattle baron or land speculator. McCarthy muddies those waters profoundly in Blood Meridian, and no character is more central to that design than Judge Holden. Casting the American West more as it truly was — as a place of moral contradictions, and less rigidly defined between good and evil than we commonly would care to consider — is one of the most fascinating and impactful achievements by McCarthy in Blood Meridian.

Although perhaps not for everyone — the novel’s graphic violence is so unrelenting as to become virtually mind-numbing to an unexpectant reader — Blood Meridian is still a classic achievement by one of America’s greatest living writers. Replete with meaning and message laced deeply into his prose, coupled to one of the most disturbing — and cryptic — endings in modern fiction, Blood Meridian is deserving of finding its way into any reader’s personal library.