Humanity and business can go hand in hand 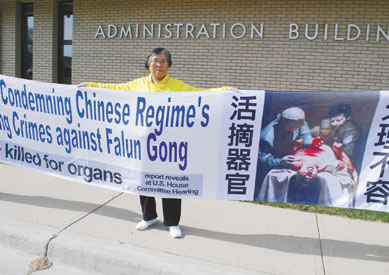 DEATH TOLL: Jinling Huang, a former prisoner in China, was part of a handful of protesters in Taber on Monday afternoon to bring awareness to accusations of organ pillaging by communist China of Falun Gong followers and other religious minorities. TIMES PHOTO BY GREG PRICE

As part of a southern Alberta investment opportunity involving the town, Alberta SouthWest, City of Lethbridge and SouthGrow, a Chinese investor delegation of a half dozen individuals will be making their way to the region next week.

What was also interesting was a complaint being called in by an individual either right before or while I was conducting an interview with Jenny Yang, a volunteer with the Falun Gong Association touring group, which is going across Canada talking about oppression of the ways of Falun Gong by China in the imprisonment of its believers and serious accusations of organ harvesting of Falun Gong members.

Yang had put out press releases to media outlets in Coaldale and Magrath as well ,as part of their southern Alberta tour of their protests. I chose to conduct the interviews in the lobby of the administration building because 50th Street tends to be quite busy with traffic during lunch hour and I didn’t want to compromise any conversation with background noise for the sake of clarity and accuracy.

As I was conducting the interview with Yang and later, 72-year old Jinling Huang, a former prisoner in China and practitioner of Falun Gong, a Taber Police Service officer was waiting patiently beside us for the interviews to be concluded. The police officer handled the situation with the utmost professionalism and care.

He was simply doing what he was supposed to do, which was respond to a complaint by a concerned resident.

That resident was a Town of Taber employee regarding the activities that were going on both inside and just outside the administration building, according to e-mail correspondence I requested for further clarity. Issues that were brought up was the banner the protesters were holding up was too graphic, according to my brief conversation with the officer, and having the protest so close to the administration building, people may conclude that the protest was sanctioned by the town.

The Falun Gong banner did indeed have a graphic element to it as there was an artist’s rendition of a doctor operating on an in-pain patient to harvest his organs while he was still alive. But can that image be any less shocking than, say, when a Pro-Life rally has one of their more in-your-face members showing a sign of an aborted fetus? Sometimes shocking images bring with them power in peaceful assembly.

Upon further probing with police officials in the nature of the complaint, town staff had received third-hand information from visitors to the counter that they were feeling intimidated as a result of the group’s activities.

I arrived at nearly the same time as the protesters for the 12:30 p.m. interview as they set up their stand in front of the administration building, and all I could notice were people holding up their banner, people seeking refuge inside the building for a bathroom break, and of course the two people I conducted interviews with, a what seems like mid-20s woman, who looked like she was 100-pounds sopping wet, and an elderly 72-year-old woman with bad knees, which she has stated came as a result from being beaten in a Chinese prison.

After the police concluded their investigation, they seemed to have no concerns about the group’s activity and no enforcement action was taken.

So why the concern by a town employee?

It gnawed at me, even more so when I started to drive out of the parking lot after conferring with the protesters a second time, only to see a town employee and town councillor approach the group just as I pulled out. I phoned Yang to inquire about the nature of the conversation and once again the fear of the town being associated with the group was mentioned, along with town officials/council wishing they knew they were coming.

Given the whirlwind of activity that happened on an early afternoon in a short period of time, it would be impossible to say that the decision for the complaint was a unilateral one by all town council and administration in the complaint.

It was most likely a knee-jerk reaction. If one did not know what the organization was about, would one not find out about the nature of the organization before phoning in a complaint to the police? And if a town employee or councillor did know the nature of the protest group, do they not know Taber’s recent history when it comes to organ donation?

Town councillor Jack Brewin is the owner of a new liver thanks to the live donation of fellow Taberite Andy Tams. The mayor, in Henk DeVlieger, has children battling chronic illness, where his daughter has been the recipient of a double-lung transplant while his son battles Cystic Fibrosis. The Times has also featured the courageous stories of Jan Clemis in her battle with kidney disease, along with this week’s issue featuring Shauna Marty participating in the Kidney March, having donated a kidney to her daughter Aidan also.

I do not even need to interview people like our mayor or town councillor to know they would be in favour of ethical organ donation.
If any town would want to be associated with a group protesting a country for the unethical practice of organ donation, which simple Google searches of articles citing sources far more qualified than myself can bring credence to, it should be the Town of Taber.

Unless of course there was some town employee or councillor who wanted to distance themselves from the Falun Gong group given the immediacy of the upcoming visit of possible investors from China.

That theory certainly was not quieted in my mind as I talked with the police officer, a phone call with Jenny Yang after my interview, and a call I received from an individual in town administration wondering when my article of the protest was going to run.

International relations is never an easy thing, I get that, but this behaviour I find a tad unsettling. And to be fair, the businessmen that will be visiting the southern Alberta area are not the government, they are simply businessmen.

But they are businessmen coming from a country that, of the more industrialized nations in the world, does not hold the highest of values on human rights on the overall scale.

China has not exactly been a bastion of human rights even in recent years where Amnesty International has claimed China ‘has the largest recorded number of imprisoned journalists and cyber-dissidents in the world.’ Be it prisons, civil liberties, freedom of the press, freedom of the Internet, freedom of movement, treatment of rural workers, freedom of association, religious freedom etc., there is both plenty of proof and accusations to go around in violation’s in the country’s history.

I get it, in today’s economy, people may think of the cliché ‘it’s not personal, it’s business.’ But should it be like that?
Perhaps it is truly a naive, Brady Bunch view of the world, especially when you are dealing with an economic powerhouse such as China. The Chinese economy overtook the U.S. economy in terms of GDP based on PPP.

However, the difference between the economies in terms of nominal GDP remains large. China is currently a $10.98 trillion economy and has been growing at around seven per cent in recent years (www.investopedia.com). But isn’t there a breaking point of decency where people are put before profits when it comes to human rights?

For any national economy to function on a global basis, China has to come into the equation given their huge sphere of influence. That does not give them a free pass in diplomacy by not addressing the elephant in the room.

Covering one’s eyes with one hand to human rights violations of a country you are doing business with while using the other hand to seal a deal and sign a contract is not a strong stance as global leaders.

Hopefully when the Chinese businessmen come around, while there can be a spirit of co-operation, good will, diplomacy and commerce for a healthy economy, there should be real talk and action as well in negotiations about the human impact of economic partnerships as well.

The residents of Canada and China deserve nothing less.