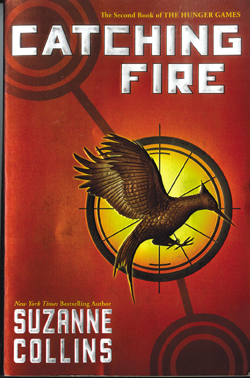 Now a major motion picture blockbuster phenomenon, The Hunger Games quadrilogy has also played a huge role in further popularizing the book series on which it is based.

Besides rocketing actress Jennifer Lawrence (who plays Katniss Everdeen) into the stratosphere of super-stardom, securing a recent near-permanent berth on the Hollywood “A” list, The Hunger Games film quadrilogy has been a monster at the box office, no doubt instrumental in putting widening smiles on the countenance of more than one film executive.

For the few uninitiated, The Hunger Games universe is a future dystopia set in post-apocalyptic Panem, a dictatorship consisting of a wealthy Capitol and 12 districts in varying states of poverty. Every year, children from the districts are selected to participate in a compulsory annual televised death match called The Hunger Games. The series follows the struggle of resourceful teenager Katniss Everdeen as she fights against the tyranny of the Capitol, both in the arena and on the battlefield, and dealing with the emotional and psychological toll of war, conflict and cruelty.

Although it ranks among the most evil of sins for a bibliophile to have watched a film series prior to reading the novels upon which they are based, unfortunately this humble narrator stands accused, and must reluctantly reply guilty as charged. Now admittedly wading through a young adult fiction series is something outside of my more common vein of experience, but before indulging in a critical review I’ll level an early verdict: For once (and this is also something seldom heard from the gullet of a book addict) the film quadrilogy has the book series beat, hands down, in terms of quality, story, and plot development. Now that the unfortunate truth (as I see it) has been put to ink, moving on to greener pastures.

All of which is not to say Collins’ series is by any means the worst trilogy of books put to press by an author, and at times one has to be careful — especially in this case — to remember that The Hunger Games trilogy is written for young adults, essentially teenagers, and not necessarily meant to be of thrilling interest to older readers whose sage palette has pushed them beyond the realm of what might have peaked their interest at age 15.

That being said, there is little about Collins’ opening salvo, The Hunger Games, that can deflect criticism that the book’s writing style is at best amateurish, and at worst in desperate need of a more effective editor (which isn’t a ringing endorsement of the good folks at Scholastic Press). For instance, leaving aside weaknesses in writing style and plot development, the first installment has multiple typos right in the printed text of the novel, little pet peeves which taken as a whole don’t inspire the reader’s confidence that much work was put into the presentation of the finished product. Which, correspondingly, opens up questions about the focus on content, which unfortunately could have used significantly more attention.

Now before I have a mob of angry teen fans brandishing Everdeen-style bows and sporting Mockingjay pins outside our office, ready to select me for the next Hunger Games for my disparaging remarks, let me say this — Collins’ story is mostly excellent, it’s just the execution that needs work. Her main character in Katniss Everdeen is fleshed out well, memorable and courageous, flawed and vulnerable, deadly but often reckless. All three novels are written in the first person, with Everdeen as narrator, the only weakness to this choice being that other characters are only viewed through the narrator’s perception, making them inevitably one-sided.

While Collins’ style in The Hunger Games could stand some improvement, enhancements were evident in her follow-ups Catching Fire and Mockingjay. Interestingly for a young adult series, Collins appears to have made a conscious choice to elevate her writing/readership level in lock-step with the perceived age range of those readers the books were targeting. By the time a reader begins Mockingjay, Collins’ style has virtually reached an adult level. Perhaps this is a common practice in young adult fiction series — I have to feign ignorance here — but it is a brilliant approach to keeping an age-progressing young readership engaged with a series as each new novel is published and released.

Not surprisingly, and something I’ve encountered before in my limited forays into young adult fiction — for an adult readership the novel series suffers from a depressing lack of detail into the background of the Capitol’s motivation for oppression, the detailed geography of Panem or its origins, its political organization, President Snow’s character and motivations for his own actions — the list could go on and on. Many might argue that this was by design on the part of the author, that to bog down a young reader with too much detail would have them running for the library door.

Perhaps, perhaps not. But for an adult reader? Most crave to know the very details listed above, and become frustrated by an author who is more interested in advancing the plot than in enhancing the background of the stage upon which the play is set. Who said atmosphere isn’t everything?

Another desperately painful subplot that overarches the series, virtually crying out for resolution while boring this reader to tears, is Everdeen’s obsessive twin love interests that swing infuriatingly from one male to the other seemingly from page to page.

By the time I was finishing Mockingjay, I was so disgusted by Everdeen’s vacillating indecision (perhaps this is just chauvinistic evidence of a man reading a first-person female character penned by a female author) that I was ready to toss the book across the room. Just make a decision, Katniss, and then I don’t have to read about it anymore. But then, leaving out an exasperatingly-juvenile romantic teen subplot for books targeting romantic teen boys and girls just wouldn’t have been the ticket, right? Let’s just say dragging it out for three novels didn’t do much to hold this reader’s interest.

Out in the real world, many have drawn conclusions about the Hunger Games trilogy, suggesting Collins “ripped off” her idea of government-enforced gladiatorial fighting to the death in an arena from any number of sources. Considering the idea of ‘bread and circuses’ as a method of controlling the masses is at least as old as the Roman Empire, these criticisms should largely be taken with a grain of salt. Allegations have centered on the reality TV “death game” theme, which is also present in The 10th Victim, Battle Royale, Das Millionenspiel, The Running Man, The Long Walk, and Series 7: The Contenders.

As an aside, even the world of political protest has been touched by the series. A gesture popularized in the book and film series (a raised up hand with three middle fingers pressed together) used to express unity with people striving to survive, was employed in 2014 by anti-government protesters in Thailand, at least seven of whom were arrested for it.

Taken overall, the Hunger Games series are an outstanding outing for a young adult crowd, but leave an adult readership wanting. The novels lack the emotional depth, detail, and more polished writing style one might expect to find in novels targeting older adults.

Leaving aside the visual of Collins’ mugshot alongside the definition of ‘poor editing’ in a dictionary, it is really hard to overlook this factor in the series without it having detract severely from the finished product. While many middling factors take away from the greater enjoyment of the series, the books are still an exciting adventure story in the post-apocalyptic vein featuring a powerful female heroine — still something of a rarity in modern fiction.