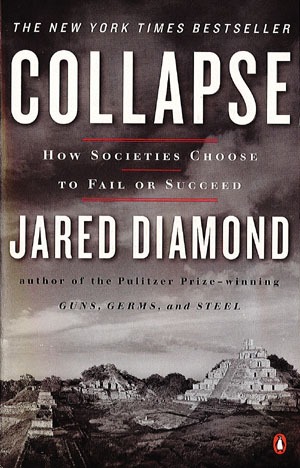 There have been many past cultures, tribes and civilizations that have, for a time, flowered in their respective environments before mysteriously disappearing, leaving little more than traces for future generations to piece together as an incomplete explanation.

The disappearance of a given culture or civilization holds a special fascination for most of us, shooting through at an almost subconscious level to alight upon a primitive, almost instinctual fear that our own society — our families, our moral values, our social structures — might not endure.

We see glimpses of this fascination in our present day pre-occupation with apocalyptic and post-apocalyptic scenarios, which predict a wide variety of events which could bring about the end of our existence (or existence as we know it today) through film and literature.

Which may indeed speak to a deeper sense in many of us — whether or not we choose to ignore or acknowledge it — that the pathway we have chosen for ourselves and our society carries with it inherent flaws that, left unaddressed, could lead to our future downfall.

While the problems we currently face — climate change, environmental devastation, pollution, population growth, equalized access to water and resources, escalating inequality between rich and poor, deforestation and soil erosion, to name but a very few — sometimes seem insurmountable, our present societies have at least begun to recognize the problems they face are often global rather than local or regional, and that various impacts have global repercussions, not merely affecting this watershed, or that mountain range, as though they existed apart from the countless inter-relationships that make up our global environment — an environment that despite centuries of study, we still don’t fully understand.

In Collapse: How Societies Choose to Fail or Succeed (2005), author and academic Jared Diamond takes a detailed look at the causes and contributing factors (those that are known to us) that impacted the success of past societies, or led to the ultimate downfall and disappearance of others.

Contrasting these problems and issues against those being currently faced by our own society, Diamond takes the reader on a journey of historical and archeological discovery with the goal of identifying what made some societies choose to change their destructive paths, and what made others so intractably opposed to change that it eventually led to their elimination.

Surprisingly for a Western Canadian readership, Diamond dives into the work with an unexpected description of the environmental problems facing our neighbouring state to the south, Montana, and encounters with the various solutions that top-down and bottom-up management are providing. Decades of unregulated mining in Montana — with little or no thought given to future clean-up requirements — have left Montanans with an environmental legacy that will cost American taxpayers billions to rectify.

Presented in chapter format as a series of case studies of past societies, and citing exhaustive research and archeological findings, Diamond first focuses on Easter Island in the South Pacific, concluding that among other issues, mass deforestation led to the disappearance of a society that may have once had over 30,000 inhabitants at its height; and a series of environmental problems (among other factors) contributing to the disappearance of the Anazasi tribes in the American southwest, as well as the Maya in Central America.

Obviously an area of personal interest for Diamond, he devotes four chapters to the development and eventual disappearance of Greenland Norse society, a fascinating case study in itself for those only familiar with the broad strokes of Viking history. Detailed are the origins of settlement, voyages and limited settlements in North America, such as Newfoundland, and descriptions of their economy, religion, and society, and how they managed to survive for centuries in such a harsh arctic environment. Often forgotten is the true extent of Greenland’s Norse settlement, with some estimates pegging population levels at around 10,000 at its height, with dozens of stone structures, churches and other buildings, and even a cathedral.

Studying more modern examples, Diamond takes a disturbing look behind the numbers at the 1994 Rwandan genocide, showing that in many instances individuals may have been murdered not based on their ethnic background, but for their land holdings or control of property, with ethnicity used as an “excuse” for the violence.

In Collapse, Diamond attempts to give the reader examples of past societies that came to a new region entirely different from their previous home, but attempt to tame that new environment under the precepts of their past society, with often disastrous results. First citing the Greenland Norse as a European society that was unwilling to discard this identity in order to adapt to conditions allowing for their survival, Diamond shifts to a modern example — that of Australia — of a European society unwilling to adapt to ways of life better suited to their new environment. The poor quality of Australian soils, heavy reliance on irrigation, raising of destructive numbers of animals like sheep ill-suited to Australia’s conditions, among many other issues, have led to devastating environmental problems over the years in the land down under. However, Diamond does admit Australians are beginning to finally view themselves as an Asian society in harmony with their environment, rather than a European society in Asia who view their environment as something needing to be conquered.

While there is little question Diamond is an environmentalist with an agenda — namely, in this case, to draw links between the collapse of past societies and modern precedents — he takes great pains (while citing much evidence and historical research) to prove that his theories and conclusions are not a selective interpretation of the facts to support an environmental agenda. In every society studied in Collapse, while there are other factors that contribute to the disintegration of a given civilization, various environmental abuses in almost every instance top the list of why or how a given society faded into oblivion.

Diamond’s conclusion, arrived at by different avenues through past historical precedents, is that some societies do choose to succeed, while others choose to fail — with Diamond attempting to prove that it does indeed come down to a choice, not a series of insurmountable problems beyond our control that conspire in our destruction. That choice, he asserts, is what fundamental values can we as society retain, and what do we need to discard if we want to survive?

Looking back at the past, it is easy for us to point at their problems and say ‘How could they not have recognized their own issues?’

As described by Diamond, what was the last Easter Islander thinking when he cut down the island’s last tree? While this is a visual and physical representation of a metaphor about destructive environmental practices, when we look at our own modern problems, we find it difficult to make correlations. Suggest to the average North American that his current lifestyle is hopelessly unsustainable in the face of his global footprint regarding consumption of resources, and you might end up swinging from the end of an unfriendly lamp post in some of the more conservative reaches of the continent. But it is exactly this line of thinking that Diamond is targeting when suggesting that a fundamental re-evaluation of our values as a society is needed if we are to overcome some of our problems in the 21st century. And while that evaluation might seem to be anathema to a great many of us, the case studies in Collapse suggest scenarios of what could happen if we choose to ignore those conclusions.

A highly entertaining account, with a wealth of historical, archeological and sociological evidence to back up its assertions, Collapse: How Societies Choose to Fail or Succeed is a potent warning sign for Western societies if they choose not to address the problems they currently face, but also carries a positive message of hope that it is not yet too late for us to change our ways.