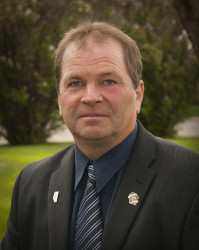 Family: Married to Deb and have two grown children

Other community/non-profit experience: 16 years on Municipal District of Taber Council, four years as Reeve of the MD, Member of Alberta Irrigation Council, Chairman of the South Region Drainage Committee, Past Chairman of the Highway 3 Economic Development Committee and Agriculture Service Board, Member of the Taber & District Community Adult Learning Committee.

What is the most important issue facing the riding?: School modernization in Barnwell ,Warner & Magrath, Doctor recruitment in Milk River, Seniors housing in Raymond, Rural Internet, Encouragement of Ag Processing

What is the most important issue facing the province?: Movement of our commodities to market, whether it be oil or grain. Reliance on oil revenue to fund programs and services

If you could change one thing from the budget released on March 28, what would it be?: I agree with the three level approach taken by the 2015 Budget; Spending Restraints, Enhancing Revenue and use of the Contingency Fund. We do not want to discontinue spending on infrastructure.

Why should the voters choose you?: Public service has always been important to me. I feel I have contributed manifestly to the success of the Municipal District of Taber through open and respectful dialogue focused on developing solutions and at this time feel it is necessary to put my name forward as a provincial representative. There are a number of reasons why I am running , they include:
1. Promote and support processing and innovation for irrigation and agriculture generally.
2. Promote a long term capital and operating plan for government.
3. Promote an education system which provides options for youth including trade training.
4. Promote community health initiatives with a focus on proactive action.
5. Promote Seniors services and facilities.
6. Promote Children’s Services
7. Promote an open dialogue with municipalities, irrigation districts, School Divisions and First Nations and other community organizations which provide services to our citizens.

Favourite quote: “It is not the critic who counts; not the man who points out how the strong man stumbles, or where the doer of deeds could have done them better. The credit belongs to the man who is actually in the arena, whose face is marred by dust and sweat and blood; who strives valiantly; who errs, who comes short again and again, because there is no effort without error and shortcoming; but who does actually strive to do the deeds; who knows great enthusiasms, the great devotions; who spends himself in a worthy cause; who at the best knows in the end the triumph of high achievement, and who at the worst, if he fails, at least fails while daring greatly, so that his place shall never be with those cold and timid souls who neither know victory nor defeat.” ― Theodore Roosevelt

The last book you read: Winning Power – Canadian Campaign in the 21st Century by Tom Flanagan