This year’s corn harvest looks to be a success 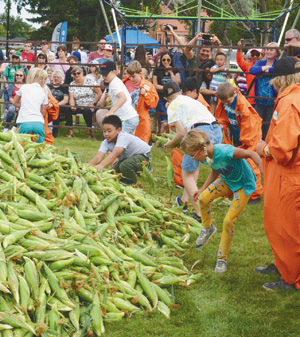 Many were out enjoying fresh corn this summer and early fall as Taber corn booths started appearing across Alberta in August. With this year’s corn harvest underway, we took a moment to speak with James Johnson, one of the owner-operators of Johnson Fresh Farms, and Jennifer Molnar owner of Molnar’s Farm, to see how this year’s harvest was.

“We’ve pretty much grown as much as we’ve always grown,” said Johnson. “A little bit later start of the season, just with the cold spring and then we started about seven days later than we typically do. Now that we have started to really ramp up — obviously because of all this heat that has come. With this heat wave now, I guess we’re a little nervous about stuff coming on too fast, but I guess we’ll find out. Sales have been good so far. The corn itself is actually really nice now that we are in our mid-season crop. We’ve got a long way to go but I would say, ‘hey, we haven’t had to deal with hail so far.’ I think everybody’s kind of relieved and that’s a bonus right off the bat.”

“The corn harvest is going really well,” said Molnar. “The corn’s coming on nice and sweet, and there’s plenty of it with the corn yielding what is to be expected. We grew 85 acres this year.”

Johnson explained if he rotates his crops to ensure that they are getting proper nutrients from the soil.

“Yeah, we rotate typically. I mean we have back to back corn on the same quarter and it’s completely fine,” said Johnson. “Typically rotate corn in a four year cycle, you know, one maybe two seasons it will be growing corn. Next year we’ll definitely rotate our field and it will be moved onto a different plot.”

Molnar discussed their method of harvesting their corn, and how their harvest is looking this year.

“We will harvest everything we could have grown and it looks like it’s going to be a great corn year, and people are loving the corn,” said Molnar. “We handpick all our corn — our harvesting is all hand picked so it is the freshest and does the least amount of damage when we harvest. Our corn doesn’t have machine damage because we handpick it which gives us a better product in the end.”