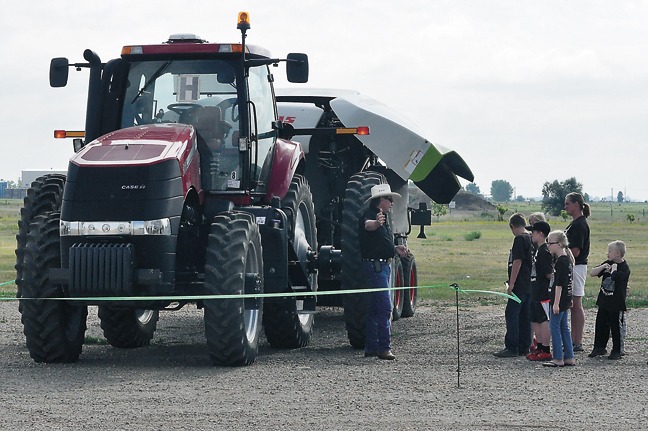 Farming Smarter (FS) is a non-profit research organization specializing in agronomy, the science of soil management and crop production. Based out of Lethbridge, Farming Smarter creates and manages research plots using a variety of techniques and controls. They experiment and study the reactions and differences in the health and growth response of the crop in each plot that they create.

He said, “This year we’re coming to the end of lot of projects. A lot of them are related to the use of a precision planter in non-traditional crops like peas, lentils, and all the different pulse crops. It has sort of confirmed what we’ve seen over the last few years. They do a really nice job of seeding in the crop. We’re in the middle of harvesting them, and the next couple of months we’ll be going through the data, crunching the numbers, and putting reports together that would sum up the findings for the projects.”

Coles explained what a precision planter is in layman’s terms. “It’s traditionally used in the corn/soybean belt of the USA. It precisely puts one seed down at a time at an equal distance from each other. It’s a very accurate way of seeding, so it’s used in gardens.” A precision planter meters the seed and there’s a difference in how it opens the soil and then firms it in place to seed nicely. Air seeders are usually used for broad acre crops in western Canada.

“We have such an expansive agriculture that we tend to use an air seeder and the meter doesn’t really (make them singular). Now, we’ve been adapting these more precise planters and trying them out with different crops. One of the things that’s different is that we’ve made much narrower rows. Corn tends to be on a 30-inch row spacing, but if you’re growing wheat, it’s on a 10-inch row spacing. We’ve been trying out different crops to find out whether that higher level of precision and seed to soil contact is showing an improvement. In some crops it is, and in some it’s just equal.”

Coles said that precision planters are not adapted for the scale of our agriculture and usually used for higher value crops. One way that the FS team improvised was they made a toolbar that allowed them to change their row spacing very easily.

Another of the FS projects has been the experimentation with ‘rolling barley.’ Coles described the purpose of the practice, saying, “Usually when you’re growing barley around here it’s for silage. The rolling is just to deal with the clumps of soil and the rocks. Usually because it’s a silage or feed you want to cut it low to the ground and get as much of that crop into your silage pile, so if you’re cutting it low and picking up rocks and dirt there are equipment issues, so the rolling is to deal with that more than anything.”

He said that after the crop is seeded, the farmer will take out a large land roller that’s filled with water and the roller flattens everything out. Farming Smarter applied for a multi-year research project grant, and are planting barley and wheat, then rolling it right after seeding and then every couple of weeks after that, all the way up until the crop is a foot and a half tall. FS collects the yield data to find out if they’re doing any damage to the crop or if they’re improving the crop.  “We actually have some real data behind it that will help inform farmers when the ideal time to do it (is).”