Injection of provincial cash for TID 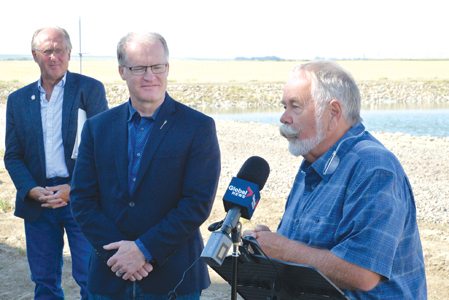 As the flurry of provincial financial announcements have continued in southern Alberta, late last week another commitment was made to the Taber Irrigation District.

“I am pleased to announce that as part of Alberta’s $10 million irrigation rehabilitation program, over $547,000 is being invested in the Taber Irrigation District,” stated Hunter. “Projects such as these will increase the water conveyance networks and the efficiency allowing more acres to be irrigated within the existing water allocation. In addition to that, I am happy to announce the governments of Alberta and Canada are partnering to grant $205,000 to the Taber Irrigation District as part of the Canadian Agriculture Partnership. The Canadian Agriculture Partnership is a five-year, $3 billion investment by the federal, provincial, territorial governments with the aim of strengthening the agriculture and agri-food sector. It was formed to ensure continued innovation, growth and prosperity in this space.”

Hunter also highlighted other financial commitments that were coming which includes $75,000 to assess, select, install and commission a centralized supervisory control and data acquisition system to track water orders and use, $55,000 to identify opportunities to collect, treat and re-sure runoff and develop the east Horsefly drain system, $40,000 for asset and critical condition management and $35,000 for aquatic weed mitigation at the Fincastle Reservoir approach.

“These projects will enhance the sustainable management of irrigation works by mitigating flood events, increasing security of the water supply by using runoff more effectively and reduce risks to operations to water delivery by improving the response time to changes and demand,” continued Hunter. “These investments will work to make sure the TID can continue to do the important work of providing consistent and predictable water for our great irrigators, municipalities and recreational enthusiasts. Irrigation is essential to Alberta’s agriculture industry. Five per cent of Alberta’s farmland is irrigated and yet, our irrigators produce more than 20 per cent of the crops. And not just any crops, they produce high margin, high yield specialty crops. Alberta’s government takes this industry very seriously and is committed to making the investments to keep southern Alberta the irrigation capital of Canada. Seventy per cent of Canada’s irrigation is located right here in southern Alberta. This positions us to be the preferred agri-food destination of Canada.”

With another announcement that will have benefits for the M.D. of Taber, Reeve Harris expressed his gratitude about the money coming in.

“We’re very pleased our MLA, our MP and our provincial government understand the importance of agriculture in our area. It’s the economic driver of our municipality and we’re even more pleased they understand the importance of irrigation which gives farmers in southern Alberta the opportunity to grow a diverse number of high-value crops. Irrigation is what has brought numerous food processors and agro-food industries to southern Alberta and what will help us to develop southern Alberta as Canada’s premier agri-food corridor in the future,” he said.

As far as the benefits M.D. of Taber farmers, and farmers across southern Alberta, are concerned, Harris explains this new financial investment into TID will create better stability for irrigators.

“It’s the enhancement to the irrigation district and that is a benefit to all of southern Alberta. Whether it is this irrigation district, or the St. Mary, which had some announcements earlier this week. The improvements in water delivery and efficiencies means more acres could potentially be irrigated because of those efficiencies found in the system,” he explained while also touching on the benefits the other announcements will bring. “The other announcements that have been made — the Horsefly announcement which was made earlier this week — a couple of years ago we had some overland flooding and that project will turn out at Horsefly Lake and leave the main canal empty from that point down so they can pick up more drainage and runoff water off people’s land. Farmer’s want to get that water off their land as quickly as possible and working with SMRID, we have a water conveyance agreement with them now so they will take that water in a timely manner.”