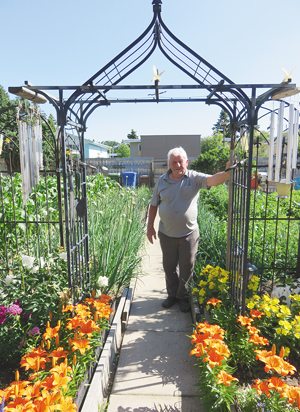 Submitted by Communities in Bloom

Tony Merkle, a 92-year-old gardener, is no stranger to the citizens of Taber. If you have ever had anything to do with sports in the community, chances are Tony has refereed your hockey game, umpired your baseball game or made the ice you were skating on at the Taber Community Centre.

Immigrating to Canada with his family from Yugoslavia at the age of two, the Merkles first settled in Regina until Tony was 14 years of age.

His father had suffered a head injury at his construction job and on doctor’s advice moved to southern Alberta and settled in Taber.

The Merkle family, like many others who came to this area, made their living in the sugar beet fields. Eventually Tony’s parents purchased the Hill farm of 80 acres south of Taber.

Tony bought the homestead from them before he married the love of his life Irene and they farmed there for many years. They sold the farm to Tony’s brother-in-law Marvin Valgardson and moved into Taber. For those of you wondering where this farm was located, it eventually was sold to Marvin’s son Ed and became known as Valhalla.

When Tony and Irene first moved into Taber they settled into the Perdue house on 52nd Street. Then in 1976 they moved into their present home on 60th Avenue where they finished raising their nine children. Tony still resides in that home today and Irene is in Linden View.

Tony, during his lifetime, has been a man of many trades. He drove a school bus for many years, was involved in sports, was the icemaker at the local hockey rink, and was manager of Parks and Recreation for the Town of Taber for 21 years.

During all this time he was honing the skills of gardening which had started in his childhood helping his mother. He said “My mother had a green thumb and I guess it rubbed off on me.”

The front of Tony and Irene’s house is full of colourful flower beds and pots but it is the backyard that takes your breath away. A small side entrance to the backyard hosts the flower garden that Irene took great pleasure in which also includes a seating area.

Upon rounding the corner it is the enormity of the vegetable garden that makes you smile. The whole backyard is row upon row of a wide variety of vegetables. From six foot tall corn stalks, onions grown from previous year’s seeds, garlic, horseradish, carrots, kohirabi, tomatoes of different varieties, strawberries, grapes, peppers, and others this is a huge garden that is very well loved and maintained.

Tony claims that nothing goes to waste because with having a large family there are plenty of people to take the excess.

Our hats are off to Tony who amazingly still works in his garden every day working the soil, planting, pulling weeks, irrigating and harvesting.
For him it is a labour of love and a chance to share the fruits of his labour with his children and grandchildren.

Kudos to Tony for showing that, with hard work and dedication, success can be achieved at any age.