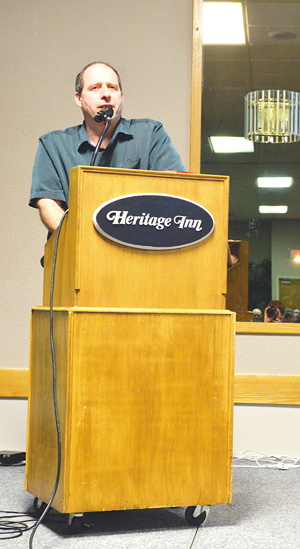 DOWN TO BUSINESS: Action Surface Rights Association chairman Ron Huvenaars speaks to the organization’s membership during ASRA’s AGM in February at the Heritage Inn in Taber. TIMES PHOTO BY TREVOR BUSCH

As Albertans struggle with the financial impact of a depressed oil and gas sector in the province, landowners and farmers with the Action Surface Rights Association gathered in Taber in mid-February to vent their frustration about unpaid municipal taxes and vanishing lease payments.

During the AGM on Feb. 12, Hays farmer and ASRA chairman Ron Huvenaars expressed disappointment over the outcome of a meeting between board members and UCP MLAs in December 2019.

“Last December, we were able to make a brief presentation to the UCP southern Alberta caucus with three of our board members going to Edmonton. This was a bit of an eye-opener. Two or three of the MLAs seemed to get it right away. A number seemed angry that we went to the Supreme Court in the Redwater case that we were talking about. We had intervenor status on behalf of farmers, and we helped to win and enforce the ‘polluter pay’ model.”

The Supreme Court’s 2019 Redwater Energy decision ensures environmental cleanup costs will get priority over creditors when companies go bankrupt. While acknowledging the concerns of MLAs regarding financing, Huvenaars came away from the meeting with little confidence there will be any change from the UCP on enforcement of surface lease payments to landowners or unpaid municipal property taxes by oil and gas companies.

“The Redwater case, they’re working through the system, and it does make it harder for some companies to get financing. My train of thought is if the numbers aren’t there, then some of these projects have to wait until energy prices improve. Our major concern at the meeting was unpaid compensation, and unpaid taxes. Unfortunately, the response from the MLA from this area (Taber-Warner MLA Grant Hunter) is we can’t start making changes for 10 per cent of the bad actors. Which kind of leads me to believe maybe he thinks the price of Alberta Select (oil) is equal to West Texas Intermediate prices whenever production exceeds pipeline capacity.”

The ASRA has also been working in partnership with RenuWell, an organization that aims to implement small-scale solar projects on abandoned oil and gas leases.

“We’ve continued our involvement with the RenuWell project, working on a landowner-friendly surface lease that has been drafted for small solar projects,” said Huvenaars. “We’ve been involved in a lot of dialogue and meetings with the U of C, the U of A, the U of L and Medicine Hat College on various projects with a focus on remediation initiatives. We also participated in the AER (Alberta Energy Regulator) review inquiry up in Edmonton, as well as an AUC (Alberta Utilities Commission) review, which also led to us being one of 12 groups invited to participate in the AUC’s distribution end inquiry.”

Debate about issues of critical concern to landowners in southern Alberta without a move toward concrete solutions is not helpful, concludes Huvenaars.

“We are looking at solutions and trying to get attention from the government, because the longer some of these issues continue, the greater the harm to our rural communities. In part, that’s what led us to issue the press release a few weeks ago, in an effort to alert the province that these issues need attention, especially while they are making revisions at the AER.”