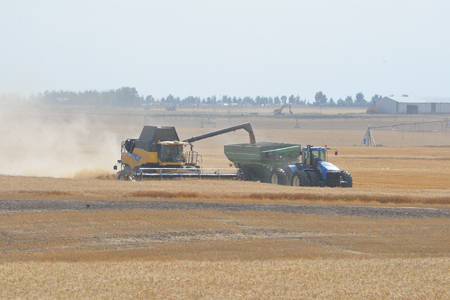 The vagaries of the growing season in southern Alberta have cut a swath of ruination for regional producers, and the recent cancellation of the sugar beet harvest is only one blow among many that have hammered the area in 2019.

Mayor Andrew Prokop sat down with the Times last week to discuss a harvest season that might be best forgotten, and the myriad trickle-down affects that the industry has on the local economy.

“Roughly 45 per cent of the beet harvest, which is huge — it’s a real disappointment for the farmers, first and foremost, and the sugar factory as well, and anybody else attached to it, from any community resident, to the seasonal workers as well, they’re all affected by the shortened campaign — seven or eight weeks I believe — as a result. So that affects the whole community and area as a result of that. It’s really hard to measure that kind of impact, but when that particular campaign — there’s roughly some 200 seasonal staff that work there, and 50-60 full time employees that rely on this income for the campaign season, normally going into mid-February. Eight weeks less is going to be a factor obviously for those people, and it’s going to affect the rest of the business sector as well in Taber and area. I more than feel for those people, and wish there was a better result because of that.”

While sugar beets are only the latest example of a crop that has been hit hard in 2019, Prokop pointed out that one of Taber’s other iconic crops, corn, was virtually wiped out by a massive hail storm that swept the region in August.

“It’s not just the beet harvest, it’s the potatoes, and some of the other grain crops also were very highly affected by this unusual weather season, and not able to get the harvest off to the 100 per cent stage that they’re normally able to get.”

Insurance is expected to cover some losses for sugar beet producers, but this compensation will probably only offset input costs for most.

“I understand as far as the farmers go, they’re losing a fair share as well. They’re covered by insurance that covers so much, but not what they would get from that crop. Some of the farming community that I’ve talked to have indicated that it’s just covering costs that deal with their farming operations, and that’s not enough. But that’s all there is through the insurance process.”

Although difficult to quantify in terms of dollar figures or overall impact on the local economy, Prokop outlined the fallout will definitely be felt among the local business community.

“Right now, the United Conservative Party is looking to cut here, there and everywhere, and we’re all going to be affected by that for the next several years as a result. But this is another scenario — I don’t want to call it a disaster, but it’s along those lines — it was unforeseen, and it’s something that’s far and away from the norm. So it can’t help but affect those people that are directly impacted, and all of the spin-offs that are attached to that as well.”