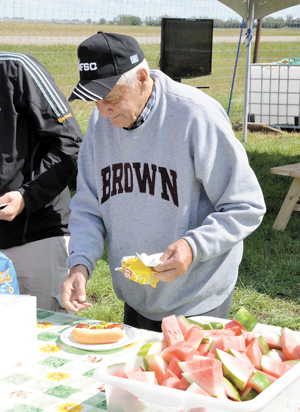 NOURISHMENT FOR THE SPIRIT: Veteran Burns Wood grabs a bag of chips after putting the finishing touches on his hot dog at The Vegetable Garden open house on Saturday. TIMES PHOTO BY GREG PRICE

The open house for The Vegetable Garden on Saturday showed exactly how strong the human spirit is.

Undeterred by a hail storm that wiped out most of the volunteer-based garden that harvests a bountiful offering for food banks in the southern Alberta region, the open house went on as planned, with the focus shifting.

While originally planning to show local residents exactly how much food is gleaned from the garden, which is directly north of Barnwell on Huckleberry Road, while also serving as a volunteer drive, instead the large crowd that visited on Saturday saw exactly what mere minutes of Mother Nature can do to food supply.

“After the hail, it was obviously pretty discouraging and we were thinking of cancelling the open house. We wanted people to see our beautiful garden and it was a wreck,” said David Torrie, farm administrator for the Community/Vegetable Garden. “But, definitely the feeling as we talked about it was that we have to make something out of this. For some people, it was interesting to see exactly what hail can do. Our whole food supply is grown mostly outside. We regrouped and put some money towards the food bank. The support has been awesome, and if we can build some more interest for the project in the long term, it will be a positive all the way around.”

People who poured into The Vegetable Garden opened up their wallets to the tune of $6,805 for the Taber Food Bank in response to helping cover the fruits and vegetables that would have been harvested in a normal growing season.

“There are still the things grown underground that could be salvaged, like the carrots, some of the onions and beets —anything that was big enough. Other than that, it was a complete wipe out,” said Torrie. “But, that’s farming, that’s nature. We will do it again next year.”

Volunteers from the Taber Food Bank were on hand at The Vegetable Garden open house to take donations, along with seeing the devastation themselves first hand on Saturday. The group is well aware of how many hours is put into the plot of land by numerous citizens and businesses through corporate challenges.

“There are a lot of hands and hearts that go into this. I know it was devastating for the people who work on it to see how it was devastated and how much food was missed,” said Kevin Leahy, president of the Taber Food Bank Society, adding 17,000 pounds of produce came from The Vegetable Garden project to the food bank last year, with 1,100 pounds coming in this year in the aftermath of the hail storm earlier this month. “Somehow, we have to replace that, and we will. There’s very generous donations coming in, including people who worked the garden where they are working their hands and their wallets. It’s a pretty caring community, and the garden will bounce back and so will we.”

Christmas is the biggest time of the year in donations for Taber Food Bank services according to Leahy, along with its lead up.

“After that, it drops off. People are going back to work and they got to pay their Christmas bills too,” said Leahy. “And so our donations drop off every year, we expect that, and we plan for it. They stay down until about this time of year (late July/August). When you are approaching harvest, people start thinking about the food bank and maybe there isn’t as many jobs around for people because the spring is easier. A lot of farmers come in with cheques or produce in hand, and a lot of people with their gardens, bring produce in hand. The donations start to increase, we do build up with food drives, Christmas comes again and the cycle starts over.”

With some of the latest statistics, the Taber Food Bank is at about 130-160 monthly clients the last couple of years.

“It bumped up a little more a few years ago and we are starting to see it slow down a little bit and we hope that trend continues,” said Leahy, adding client numbers are not always singles accessing food bank services. “Some of the clients have families, some of the clients have dependents and some of them are singles. There are a multitude of reasons why clients need the food bank.”