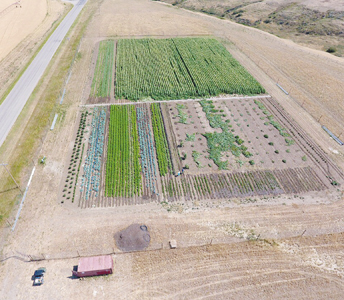 The Community Garden initiative continues to nourish those in need, and now organizers are holding an open house/celebration barbecue on Aug. 17 to showcase the garden to people who may want to lend a helping hand.

The plot of land, straight north of Barnwell on Huckleberry Road has had people growing and harvesting fruits and vegetables in it for four years now, giving thousands upon thousands of pounds of food to the Taber Food Bank and various other food banks around the southern Alberta region.

The initial growing season had members of the Church of Jesus Christ of Latter-day Saints tending to the garden, but volunteers have since grown to other faiths, corporate members and simply community members who have helped nurture the project using their green thumb and harvesting skills.

“One of our biggest goals of the garden, and I think it’s happened, is there is a lot of things in small communities that tend to put people into different groups. This is something that as a community we are working on together,” said David Torrie, farm administrator for the Community Garden. “In reality, there is a lot more about us that is the same than different. The food bank is a cause that people can agree on. Most of us want sick people and underprivileged people to have healthy food to eat and so it gives us common ground to work together on. It’s been really nice that there have been other ministers from other churches that have worked together. Businesses have come out and worked together with the chamber of commerce. We are getting to know each other and it makes for a happier and safer place to be because you trust and care for the people in your community, even if you don’t agree on everything.”

The success of the Community Garden has been so big that the Taber Food Bank can’t intake all of the fresh produce at once which has a limited shelf life, and so other food banks in the region have benefited.

“One of the struggles of a big project like that is the food comes all at once. We try and stagger that planting and try and spread it out. But, without storage, the food bank pretty much has to take the stuff as it comes out of the garden. Thankfully, there are other food banks to take the overflow and they are willing to share. Taber Food Bank is pretty well connected with other food banks.”

Volunteers of all ages have helped out with the Community Garden which has included some quality family time.

“It’s great for families. The little kids run around and a little bit of hoeing. It’s families coming together. It’s been amazing to see,” said Torrie. “We’ll have 60 to 70 people coming out at a time. That’s a lot of weeds being pulled with 70 people. Another goal has been to give some families experience in a garden that maybe haven’t tried it, after doing it, they are saying ‘Yeah, we can do this at home.’ Even if it’s just a few planter boxes, fresh vegetables taste great and are good for you.”

Approximately two to three acres that are worked on, Torrie noted it has been trial and error with what has been planted and harvested over the years, but always keeping in close contact with the Taber Food Bank on what items seem to be flying off the shelves in demand.

“It’s definitely a learning process. There are some things we’ve planted early on that don’t work and other things we are surprised. Depending on the season, if we have a really hot season then watermelons work and if we don’t, they don’t work and don’t get big enough,” said Torrie. “One of the bigger drivers is at the end of each season, we meet with the food bank and discuss what the people really like and clean them out of. We plant more of those highest demand items. It surprises us. They really like peppers, even the hot peppers — we can’t seem to grow enough peppers, we didn’t know there was that much appetite for hot peppers.”

Community Garden organizers are hoping the upcoming open house gets a more diverse group of people helping out with the project.

“It’s just so it’s not the same 20 people are doing it all the time. The open house will make people aware and what days we work,” said Torrie, adding the main season sees volunteers out at the garden on Tuesday nights, and once things get busier around harvest time, volunteers go out on Tuesdays, Thursdays and sometimes Saturday mornings. “We’ve had a bit of a mandate to have more volunteer activity on our land instead of just renting it out, so this is a project that fits that where fresh vegetables are a huge deal to the food bank.”

In recent years, the Community Garden has issued out corporate challenges to the business community where response has been solid.

“It has been a great response so far. We have had Saunders Insurance out there, Johnson’s Drugs is coming out. For me, I am kind of wearing two hats, one from the Chamber board and one from the Vegetable Garden Committee,” said Matt Williams, former chamber of commerce president. “The committee asked me to get involved with my Chamber contacts to get more community businesses involved and the idea of the corporate challenge came up. This is the fourth year of planting the garden and just like any volunteer project, once that ‘honeymoon’ phase is over, it’s a bit harder to get volunteers out. This new idea was a way to get more community awareness, and help out there, and provide local businesses a fun way as a team to give back to the community.”

The Community Garden Open House and celebratory BBQ will go from noon-2 p.m. at the garden site which is straight north of Barnwell along Huckleberry Road.

“We are really grateful for all the people from the community who have already come out. You can’t do that big of a project without a lot of willing people.”

If a local business wants to get involved in the Community Garden Corporate Challenge, they can contact Matt Williams at 403-360-7455 or by e-mail at matthew.k.williams@gmail.com. They can also call the chamber office directly at 403-223-2265.