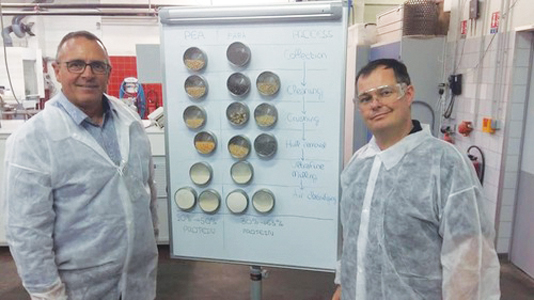 As plant proteins continue to gain a larger base of support around the world, the Municipal District of Taber is hoping to play a role in bringing more opportunities to the region.

One of the initiatives being brought forward in Alberta is the Plant Protein Alliance of Alberta (PPAA) which hopes to facilitate the development of a diverse, profitable and sustainable plant protein and plant ingredient processing industry.

During the M.D.’s regular meeting on November 13, council discussed the possibility of acquiring a non-voting membership in the Plant Protein Alliance of Alberta.

“We talked about this a little bit at the Ag Service Board. What the plant protein’s objective is, this isn’t a group that is going to build factories, this a group that is going to bring manufacturers here to take a look. This is a key between growers and manufacturers, that is where we see the PPAA. We’re hopeful to get some funding through the PIC (Protein Industries Canada) Initiative that was announced at Superclusters. We would be the Alberta arm, there is also a Manitoba group and a Saskatchewan group. The plan is to work together as prairie provinces in order to try and bring some industry here,” said M.D. of Taber Coun. Brian Brewin, who also sits on the PPAA board. “For now, we are trying to go around to municipalities explaining what we’re doing and selling it that way. But there is a lot of interest out there, it is just a matter of getting the word out and explaining what we’re doing.”

At an earlier Ag Service Board meeting this month, they recommended to M.D. council to acquire a PPAA membership.

One of the bigger pieces of the puzzle the M.D. had been working on was sending a staff member and a councillor to the Bridge2Food Summit in France held last month, which revolved around plant proteins.

After getting back to the M.D. from the summit, those in attendance have reported back a big success in attending the event, especially since the next Bridge2Food summit will be in Calgary next spring.

“There was a lot of people who heard about this conference and wished they could have gone (to the France summit) and I think there are a lot of producers in the area who will join up to the one in Calgary. If they knew they could buy a membership and become a member of the PPAA, they would,” said Coun. John Turcato, who attended the France event. “This is a real benefit to the M.D.”

Joining Turcato in France was the M.D.’s director of planning and economic development, Kirk Hughes, and the two had plenty of opportunities to speak to various organizations in the protein world.

While plant protein was a major focus at the event, Turcato says many types of protein were looked at.

“The most amazing part of the conference for me was seeing how many proteins they’re using. You name it and they are using it. There doesn’t seem to be any end, anything that has protein, they are trying to extract it,” he explained.

In trying to bring that industry further over into Alberta, the PPAA is hoping to continue their growth as well.

Though they are looking for more memberships, Brewin says it is not their focus to become dependent on the government.

“Two messages, first is PPAA does not want to become a government sponsor group. We are under the feeling that if we can’t get up and get industry and grower support on this, then we probably aren’t doing our job. Initially, we are going to have to get some seed money. Two is, it is not an us or them when it comes to animal protein. I really believe that we can become the protein provider and I don’t think it matters if it is animal, plant or what that is. I think we work in cooperation with the plant protein, in fact, we could probably use some of the by-products from the plant proteins to feed the animals,” he said.
“This is something the consumer is demanding and I guess the consumer is always right. So how do we work together to provide demand?”

Memberships are divided into five classes with Class A listing entities with employees of 50 and under and more than 50 which comes with price tags of $350 and $550, respectively.

Class B has prices of $550 for province/ministry department/branches, regional economic development authorities, regional services commission, cities with populations of 50,000 or over and municipal districts and counties.

Prices of $350 for indigenous groups/communities/people, cities with populations under 50,000 and local economic development authorities while a price of $300 for towns, $250 for villages, specialized municipalities and controlled corporations/partnership controlled by an indigenous group.

With the M.D. falling in Class B, they would be a non-voting member but who be able to elect one director.

As the M.D. has made it clear they want to be in on plant proteins, they voiced their opinion that they should continue forward with a membership.

“I think it is important enough that we made a commitment as a council to support it, not just in this membership but by sending staff and council to the summit,” added M.D. of Taber Deputy Reeve Tamara Miyanaga.

A motion was made to acquire a membership and to promote the PPAA through their website and social media and was passed unanimously.

If you are interested in becoming a member of the PPAA, you can find the application form at http://www.ppaa.ca/members.