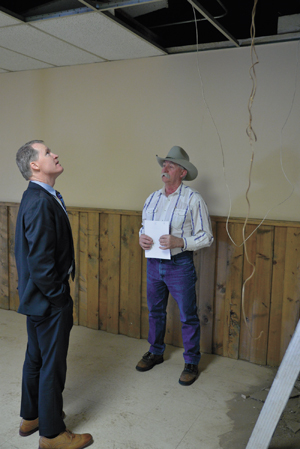 RAISE THE ROOF: MLA Grant Hunter examines a portion of roof at the Agri-Plex that suffered some damage during a recent heavy snowfall. TIMES FILE PHOTO

With an ailing Taber Agri-Plex suffering from a deteriorating roof and outdated bathrooms, the Taber Exhibition Association (TEA) has secured a $350,000 debenture from the Town of Taber to upgrade the aging facility.

“We were looking for $350,000 to replace the roof on the Agri-Plex, and do some upgrades on washrooms,” said Kast. “In the past week, with snow and melting, the roofing project became pretty important because we had part of our roof cave in a little. What were just holes in the roof due to aging tin, it’s become a major leak because the tin actually had pulled away from the main building.”

The TEA had indicated that at their Feb. 15 meeting, the board decided that taking a debenture over a 20-year amortization period would work best for their financial situation. The TEA was also requesting that if renovations were approved, council would consider waiving the building permit fees that would be required at the time of the building permit application. According to administration, “$350,000 coming from town reserves could implicate existing approved projects scheduled for 2018,” although it was unclear what the term “implicate” was referring to in this context. Administration went on to state that “depending on council’s decision, this topic could have an impact on staff resources and time, (including) the creation of the debenture, borrowing bylaw or application for lending.”

“I’ve seen what’s occurring there, and it’s sorely in need of a new roof,” said Coun. Garth Bekkering. “The bathrooms, I think is crucial — there’s two bathrooms here involved — that they be included in this, because the present bathrooms are currently outside the scope of the fire code.”

In 2014, the facility’s original roof was re-screwed, with the expectation that the existing roof would need to be replaced within five years. The Taber Agri-Plex was constructed in 1983.

Following discussion, council voted unanimously that in accordance with the existing lease between the TEA and the Town of Taber (Sec. 5: Additions, Alterations, or Renovations) it authorizes the Agri-Plex Building Roof and Bathroom Project scope of work as presented.

As part of the same motion, council also received the request for funding for the Agri-Plex Building Roof and Bathroom Project from the TEA and authorized a debenture from town reserves in the amount of $350,000 over a 20 year amortization period at Alberta Capital Finance rates.

And further, council considered the TEA’s request for waiver of permit fees to a maximum amount of $7,300, of which the town would relinquish its proposed revenue, while still forwarding the applicable 50 per cent fee amount to Superior Safety Codes, to come from town reserves.