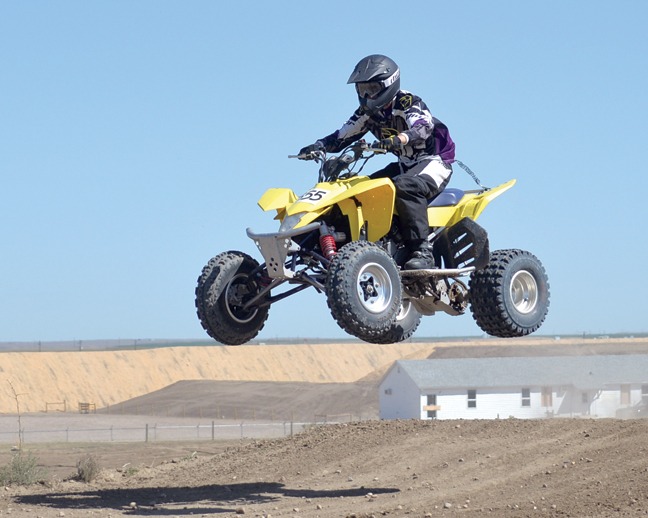 As the warmer weather approaches in southern Alberta, the Municipal District of Taber is taking a look at whether developing an ATV bylaw would be beneficial for the area.

As no bylaw is currently in place, M.D. councillors were brought up to date by M.D. staff on some situations that have occurred in the past and how other municipalities are dealing with similar concerns, at their policy meeting on Feb. 22.

Recently an ATV motorist was stopped by M.D. community peace officers due to the driver lacking a helmet and proper registration.

“We had an individual stopped with an ATV and honestly I didn’t realize that it was a municipal responsibility if we want to allow or not allow ATV’s on our roads. I’ll be honest with you as a farmer and a rancher, I spend an awful lot of time spring and summer (on an ATV), that’s probably the main means of transportation,” said Reeve Brian Brewin.

The agriculture community in the M.D. are some of the highest numbers of people who operate ATV’s and the M.D. CPO’s have discretion on situations they run into.

For the most part the CPO’s are well aware of what the vehicles are being used for but when driver’s don’t have the proper paper work or riding equipment, that’s when they get involved.

“Most of the ATV complaints we get are from the hamlets which would be designated as a no drive zone anyhow. Had that person been wearing a helmet and the Walmart road (Range Road 164) is a busy road. I think those are the two beginning factors, had that vehicle been on any Range Roads with a helmet and proper equipment, I don’t think we would have had any issues. My guys are pretty good with discretion simply because they understand farming operations,” said Kirk Hughes, development and community safety officer for the M.D. “The way the act is written right now give us that discretion. As peace officers, I think with the people we’ve hired, agricultural their discretion is important here and they exercise it appropriately.”

While the peace officers have leeway for agricultural uses, driving ATV’s in the many hamlets in the M.D. won’t fly.

Most of the ATV complaints that come their way is due to riders driving around hamlets such as Grassy Lake and Enchant.

Some may know of the rules but Hughes says education of what is and isn’t allowed is a big factor.

In order to get an understanding of what other municipalities were doing in these situations, Hughes has been reading other bylaws put in place.

The two other M.D. peace officers have also done some digging in order to be prepared in case council wanted to proceed with drafting a bylaw.

“I read all of the bylaws from other communities, Peace Officer (Henry) Peters actually at the AACPO (Alberta Association of Community Peace Officers) conference spoke to another municipality asking them what they do with their ATV bylaw, some have gone as far as writing their own particular bylaws allowing ATV’s to operate on Range Roads and Township Roads,” said Hughes. “The Traffic Safety Act is pretty clear, even if you do allow this to occur they’ve still got to have the helmets, the registration and insurance.”

Considerations for an ATV bylaw would include a requirement from the Traffic Safety Act to have lights (headlights and signal lights), license, insurance and a helmet, a maximum speed limit, operation in daylight hours and types of ATV’s that are eligible to operate on roads.

Some of the nearby municipalities who have constructed ATV bylaws included Leduc County, Municipality of Crowsnest Pass and County of Warner.

While council opinions were varied on how best to approach adding an off-road vehicle bylaw, one councillor was happy with how things were with CPO’s using their discretion.

“I, personally, am not in favour of putting a bylaw in. I think that if you’re licensed, registered and wearing a helmet, and you’re doing your agricultural business, you should be all right,” said Deputy Reeve Merrill Harris.

Another councillor was vocal in his opinion that having it only exempt for agricultural purposes would be the wrong way to go about things.

“I think exempting it for agriculture is the wrong message because if you exempt it, it should be for work related. It could be a number of different things. I don’t think it should just be agriculture,” said Coun. John Turcato.

A motion was put forward to look into establishing a municipal bylaw for the operation of ATV’s on roads and was passed unanimously.