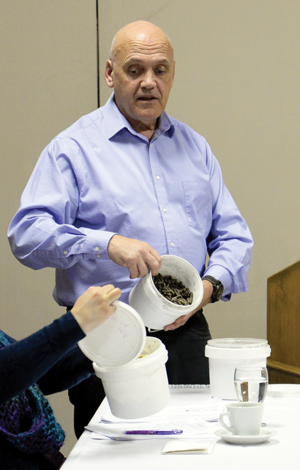 With a continued focus on environmental impact, Lantic Sugar is preparing to cut some of their emissions but first they wanted to allow the public to get their say in.

The staff at Lantic Sugar was looking to hear opinions and concerns from the Taber community as they apply for a Certificate of Variance (COV) to operate their pulp driers for the 2018 and 2019 processing campaigns.

First in place for the company is to apply for the Certificate of Variance from Alberta Environment and Parks to continue their drier operations.

“What happens is, to put it in a nutshell, we had a plan in place prior to 2016 or 2017 where we would have a two year phase in of the dry problems. We originally had a series of wet scrubbers and cyclones, that was the original plan before the carbon levy came in. Our operating limits are 0.6 grams per kilogram of particulate through the stacks, where the steam comes out. That is traditionally what we’ve been operating under, that limit was reduced to 0.2 in 2015 and for 2017, the campaign we’re just finishing on Friday night, we should have had the north drier in compliance at 0.2. Next year we’d have the south drier at compliance at 0.2. That changed, it is now 0.1,” said Andrew Llewelyn-Jones, Lantic operations manager, at the Feb. 28 open meeting.

The operations at Lantic were under Town of Taber EPEA approval 10397-02-00 which deals with all limits at the plant including air, water and waste water.

Under this approval Lantic was under requirement to install pollution abatement equipment to one of their two driers, its exhaust stacks, scrubber stacks and drier cyclones with an estimated completion date of Feb. 2017.

“In 2017, we should have had a new system in place for the north drier, that wasn’t going to happen because we had to re-engineer how we were going to accomplish this so we had to apply for a certification of variance to be able to operate the north drier this campaign. We will now be looking for a COV to run both driers in 2018 at least,” added Llewelyn-Jones.

With the requirement to cut their grams per kilogram of particulate down to 0.1 after it originally was set at 0.2 and 0.6 respectively, the technology to get the lower numbers has been a difficulty.

Especially with the cost of the project for each drier set around the $25 million mark, Lantic wants to make sure whichever way they head is the best option for the plant.

“The 0.2 was established in our operating license in 2008, it’s every 10 years. So in 2008 we were told 0.6. In 2012/13, we were told we’d need a compliance of 0.2 at that time so that’s when we started looking at the options and at that time we were looking at a wet scrubber and cyclone option. The long short of it is, we want to be in compliance, we just want to find the right fit knowing that it is a significant capital investment for us,” said Llewelyn-Jones.

Town of Taber councillors Mark Garner and Joe Strojwas were both present at the meeting and had plenty of questions, particularity about the particulate emitting from the stacks.

Questions about what it actually is and the effect is has on both the environment and people in the vicinity were asked by the councillors.

“We take the sugar beet, we put it into piles, we slice them, we take the sugar out of them and what’s left is the pulp, it’s organic matter. We put those through a series of presses, we press the beet pulp first to get more water and juice out and that water and juice goes back into the process. Then what we do is dry the press pulp, we add molasses to it actually, so you end up with pellets,” said Llewelyn-Jones. “There will be smaller particles that go up with the steam as you’re drying.”

He also noted that the plant does have air monitoring equipment on site near the equipment garages.

With the particulate matter being completely organic material, the team from Millennium EMS Solutions advised those in attendance that there was no evidence to claim that it would be detrimental to human life and would most likely break down naturally.

As the significant investment will be made in the near future, Lantic will continue to investigate options that will best suit the plant for the future.

The biggest thing for them, though, will be to come under compliance based on the regulations set and they are confident that they will indeed meet them.

“At the end of the day there is a compliance that we have to hit and that’s what we’re striving for,” said Llewelyn-Jones. “Because of the significant investment, we have to make sure it’s the right fit for us.”