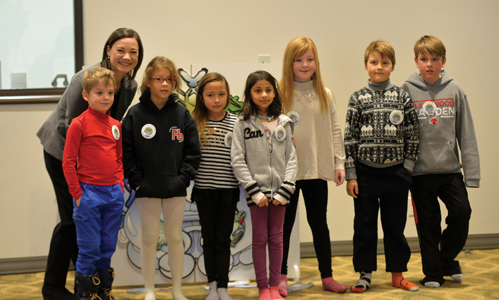 Taber Irrigation District (TID) has been recognized for their work on projects that aim to help with Oldman Watershed rehabilitation.

During the Oldman Watershed Council (OWC) closing ceremonies on Nov. 17, TID was honoured for three of their ongoing projects in the Taber area. One of the three projects saw the TID construct a wetland area.

“TID stepped up with three different projects, so the first project was the Taber Lake Lateral Constructed Wetland. This was funded primarily through the Watershed Resiliency and Restoration Program. It’s a constructed wetland east of Taber Reservoir that filters and absorbs water prior to running into our Taber Lake Lateral. That project is located three kilometres east of the town,” said Chris Gallagher, district manager for TID.

An important component of the wetland is the introduction of cattails and TID says the project still has a ways to go.

“Once the cattails are fully established it will be actively filtering the upper and lower portions of our irrigation water,” said Gallagher. “The construction started in the spring pretty much in April. It was physically built prior to our start up in May and that was the actual physical structures. The cattail establishment was the main focus of the summer. We had to maintain water levels quite carefully, we had a few events where we did deliberate flooding to raise the water level up and then drew it back down again, pumped it out, did additional seeding all under the direction of Native Plant Solutions.”

While they knew the project would be beneficial in the long run, they had a few challenges they had to deal with before starting construction.

One of the bigger hurdles TID had to overcome was the unknown ground conditions where they planned to construct the wetland.

Another concern they had was the ability to grow cattails on the land but thanks to some outside help, they were able to efficiently start the project without much issue.

“The ground conditions were quite a variable there and we had George Miller Excavating come out. We originally tendered the project and that was a challenge due to the unknown ground conditions so Native Plant Solutions did the design and project management, they did a great job. That was the first challenge and the second was establishing the cattails. We got slow germination at first but now we’ve got a good density of spears that kicked in later in the summer. It’s going to take probably another year or two before we get really good, thick cattail but it’s looking good,” said Gallagher.

On top of the wetland project, TID has also been focusing on drain water synoptic surveys. The purpose of the second project is to get accurate results of how the water is affected as it travels through inlets down the canal.

“The second project, this one was funded 50/50 with the Growing Forward 2 Irrigation Conveyance Works Management Program, the title of that one is the drain water characterization and synoptics study. With that one, we basically are looking at the quality of water we’re receiving through our drain inlets so we did a lot of sampling at different times of the irrigation season when we did have rain events, particularly in the spring. There are over 60 different sampling samples taken over nine different sampling events. The main one that was done is called a synoptic survey which it’s where they follow a slug of water down the canal. The canal we chose was actually the Taber Lake Lateral in between the wetlands and Fincastle Reservoir,” said Gallagher. “So we followed that all the way down, took samples at each drain inlet during rain events in June and determined the quality of water in the drain and in the canal.”

While the testing has been completed, the results are still not 100 per cent clear as the data has not yet been fully compiled.

Even though it’s not finalized just yet, Gallagher says they have seen some similarities with what they do have data wise.

“The data is still being compiled but they’ve already noticed a trend that there is an impact of drain water in the quality of water in the canal. It’s not a big surprise but the main reason they were able to determine that is because they did the wet studies and of course we had nice dry conditions for quite awhile. So they did a dry study as well, followed it along just to see what would happen with the water quality with no drain in flow. That kind of eliminates the factor of ground water or influence of the canal bed materials on water quality. We do know that it is primarily due to the water that is coming in our water inlets.”

Another factor of the projects involves a product that the TID envisions using on more projects in the future.

“We also tested denitrifying bioreactor, so this is a system that is basically a trench with hemp straw in it and the tile drains from one farmer’s field into our Taber Lake Lateral. So that was a condition on this farmer’s drain consent, he had to provide some mitigation because we weren’t currently receiving drainage from that field. In the process we installed a monitoring site upstream of the bio reactor and evaluated it. We’ve noticed a significant improvement in nitrates, e.coli, total suspended solids and even total dissolved phosphorus. It is actually a potential solution that we are looking at for other projects,” said Gallagher.

The third project revolves around the replacement of a canal into underground pipelines.

“The third project is the Lateral 18 Taber water quality improvement. This was a project funded by the Irrigation Rehabilitation program, Alberta Agriculture, as part of our Lateral 18 pipeline project. This was a canal for irrigation deliveries, we replaced the canal deliveries with a buried pipeline system so the farmers who need water under their fields no longer need the canal but we left the old canal in place to receive field drainage and storm runoff. We knew that if we didn’t, it would create some problems on the farmer’s fields so we left that in place. So we thought ‘we’ve got this whole canal, let’s see what we can do to make the best of it,’ so we repurposed it and installed 14 structures to receive the storm runoff. It absorbs incoming storm flows, settles out and filters the runoff and releases the treated water slowly into Taber Lake Reservoir,” said Gallagher.

A part of why this project was completed was where the water was flowing to.

“One of the main reasons we wanted to look at this project was because the water off of that area ends in the Taber Reservoir which continues on into other purposes, we want to keep it clean. People do use Taber Reservoir for recreational purposes. They’re out there fishing and enjoying the shoreline which is owned by TID. The return flows, when we are not irrigating, go off to the river so it benefits the Old Man River and everything downstream. The other thing that we are finding is the initiatives that we’ve been taking in the district have gotten the attention of the M.D. of Taber and the Town of Taber. The M.D. of Taber is looking at working with us on some projects that will benefit their constituents as well as the district. The same with the Town of Taber in addressing storm water management,” said Gallagher.

Moving forward, TID has plans for more projects that will continue to preserve the reservoirs in the area.

“The immediate one that we are working on is entitled Reservoir Riparian Enhancement, it’s a fancy way of saying we’re putting in some fences and cattle watering sites. Basically what we’re trying to do is protect the riparian zone around our reservoirs because we do have grazing leases around most of our reservoirs.”

“It’s a critical zone between the land and the water, so if we have good healthy vegetation in that area it helps to absorb nutrients and other things from getting into the reservoir.”

With the future looking bright, TID have been very thankful to the OWC for all of the support they have gotten in the past.