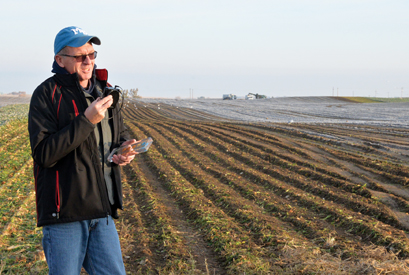 BEET STREET: Arnie Bergen-Henengouwen gives those attending the beet tour a good look at one of the beet fields located in the Taber area. TIMES PHOTO BY COLE PARKINSON

The Alberta Sugar Beet Growers were once again giving people the opportunity to take a tour of the process sugar beets go through from field to store.

The tour earlier this month gave a glimpse as to what goes into growing a sugar beet in the area with a tour of a local beet field.

The first stop allowed a teaching moment for those on the tour as President of the ASBG Arnie Bergen-Henengouwen gave everyone a run down on the cycle from the beginning until harvest.

He says this year’s crop looks fairly consistent with the past years and he hopes for nice weather as they continue the push.

“It’s still quite early, the crop looks very good. Initial results of the quality are really good so looking forward to really good harvesting weather in the next couple of weeks. We need three good weeks without any more moisture and relatively moderate temperatures,” said Bergen-Henengouwen. “As long as the weather holds out we’re OK. I know our eastern growing districts haven’t harvested very much at all yet so we’re looking forward to the forecast smartening up here for sure.”

The unexpected snow storm that kicked off October wasn’t ideal for any of the farmers but they’ve had to deal with the fallout.

“We’re later than normal because we like to get going full swing October 1 where as this year we had a big snow storm on October 2 which delayed everything a week. So we’re a week to 10 days behind,” said Bergen-Henengouwen.

Farming equipment was available up close and personal to show exactly what happens daily during the harvest of sugar beets in the Taber area.

The tour then shifted over to the Lantic plant in Taber to see what happens once the beets are transported from the field.

The trucks transport the beets to the Lantic factory where they are put through the ringer in order to extract the sugar.

With harvest behind by about a week, workers in the plant are exceptionally busy and will continue to be so until the plant closes down until next season.

Reeve Brian Brewin for the M.D. of Taber had a chance to take the tour and he says that its neat to see all of the farmers and equipment up close.

“This has been a cool day because I was born and raised here and always seeing but I don’t know if I’d actually been out at the processor and everything,” said Brewin. “It’s interesting to see everything up close with how its all done.”

The whole process takes plenty of people in order for a successful season and Brewin says the town and the M.D. see great benefits from having sugar beets grown in the area.

“The factory is based in the town but the beets are produced in the municipality, so it’s a good tie between the two. It’s a win-win for everybody,” said Brewin.

While the tour lasted over an hour, not everything was shown as the plant encompasses a massive amount of real estate but overall everyone attending got a good feel as to the process that sugar beets go through once reaching Lantic.

The plant will remain open until February of next year before shutting down for the season, typically they get started again around June.

For now though, you’ll continue to see plenty of trucks full of beets making stops to and from the Lantic factory.