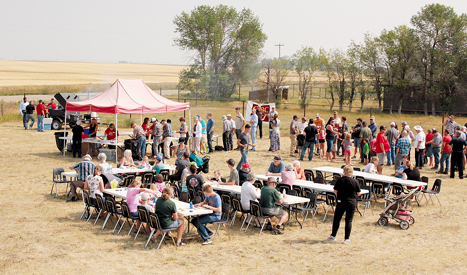 TENDING TO THE CROP: There were 12 combines in total that helped with the 2017 Taber and District Foodgrain’s Project. TIMES PHOTO SUBMITTED

The summer heat has pushed August’s Taber and District Foodgrain’s Project to its greatest heights.

There were 150 people who came out to the thank-you lunch for volunteers, where 12 combines, eight trucks and three grain trucks came out for the harvest.

“It’s the best crop we’ve had for the project in a number of years. We were right around 100 bushel per acre,” said Jeremy Wind, chairperson for the Taber and District Foodgrain’s Project. “We combined everything in two hours.”

That amount topped last year’s 85 bushel per acre which brought in approximately $70,000, with this year’s crop expected to raise between $80,000 to $100,000. This year’s foodgrains project was harvested on a 150-acre field, four miles south of Taber.

“They do projects all over the developing world. Food aid, irrigation projects, farming best practice, nutrition for women and children…things like that,” said Wind. “I know the latest project they have started is in South Sudan, there is a massive famine there right now.”

Over 20 million people in South Sudan, Nigeria, Somalia and Yemen are at risk of starvation due to famine according to the Canadian Foodgrains Bank Web site.

The Taber and District Foodgrain’s Project has been in existence since 1997.

“I feel that the Canadian Foodgrains Bank is a great cause who do really good work. To see the community come out seems to agree with me with that many people coming out,” said Wind, adding he has been involved with the project for seven years now, chairing it for five. “It’s very encouraging to see.”

A team from CIBC provided and served lunch as business and community members also donated cash and service in kind towards the project to keep input costs to a minimum to run the harvest.