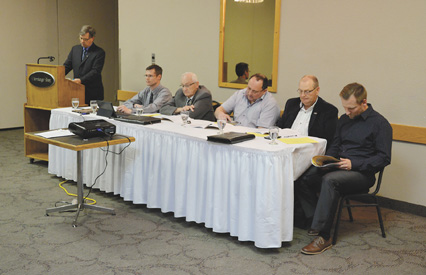 MUSSEL MEN: Aquatic invasive species were a topic of discussion during the TID's recent AGM. TIMES PHOTO BY TREVOR BUSCH

Keeping rats out of Alberta has been an epic battle waged with deadly seriousness over the years. But with beady-eyed rodentia seemingly at bay, the province has now switched a vigilant eye to aquatic invasive species.

Considering the potential economic implications of an invasive mussel infestation, it shouldn’t be surprising that irrigation districts in Alberta are approaching the situation with equanimity.

“Aquatic invasive mussels are a greater threat as they became well established in Manitoba, and were found in Montana reservoirs in 2016,” said district manager Chris Gallagher in his written report during the Taber Irrigation District’s annual general meeting. “Zebra and quagga mussels can attach to many surfaces, including inside pipelines, and would cause significant problems for our district.”

Zebra and quagga mussels are freshwater bivalves native to the Black Sea region of Eurasia. Both species were believed to have been introduced in the late 1980’s by ballast water from transoceanic ships carrying veligers (larvae), juveniles or adult mussels.

Zebra and quagga mussels are capable of heavily colonizing hard and soft surfaces, including docks, boats, break walls and beaches. These colonizations are also responsible for clogging intake structures in power stations and water treatment plants, and could have a severe impact on irrigation infrastructure.

“TID is continuing to support the prevention program for boat inspections — including mussel detection dogs, decontamination, and the Clean-Drain-Dry your boat campaign,” said Gallagher.

In Alberta, they are regulated under the Fisheries Act. Inspectors are hard at work to ensure infected watercraft never enter Alberta waters, as should these mussels enter an irrigation district, they can clog pipes, intake pumps and cause problems when they’ve become established in an area.

“We manage our set of mussel substrates and conduct annual infrastructure inspections to check for shells,” said Gallagher. “We have been participating in planning for an infestation both in response and control strategies. An infestation will result in a significant increase in water rates. Let’s do our part to keep these invaders out.”

Recreational water users can do their part by inspecting their boats, trailers and equipment after each use, and removing all plants, animals and mud before moving to a new water body; draining water from motors, live wells, bilges and transom wells while on land; and rinsing all recreational equipment with high pressure (over 250 psi), hot water (50°C / 122°F), or letting it dry in the sun for at least five days.

Tony Wikkerink, in his engineer’s report, noted the TID had been hard at work throughout 2016 in making sure the district is prepared in the event of a possible infestation.

“We continued to administer the TID’s Aquatic Invasive Species program, which has become even more important given the recent discovery of zebra and quagga mussel veligers in Tiber and Canyon Ferry reservoirs in Montana.”

The invasive mussels are primarily spread through the transportation of watercraft from infected waters to unaffected areas. Infected lakes have been found in Manitoba (Lake Winnipeg), Utah, Southwest United States and Eastern North America. Boaters are discouraged from transporting boats from these areas.

Aquatic invasive species like quagga and zebra mussels can spread quickly and can live out of water for up to 30 days.

“The financial and operational costs associated with a mussel infestation in southern Alberta would be immense,” said Wikkerink. “Therefore, we must continue to be vigilant on this front.”