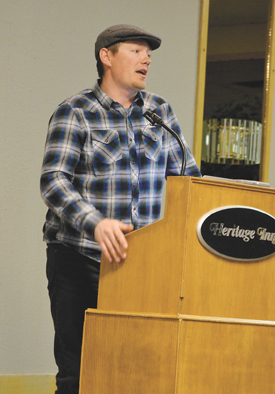 WELL WHEN?: Regan Boychuk, an independent researcher who recently sat on one of the royalty review’s advisory expert panels, discusses environmental clean up of oil wells in Alberta.

The problem of just who should be responsible for cleaning up abandoned oil and gas wells has had a long and complicated history in Alberta, and the future may not be a bright one for taxpayers potentially left on the proverbial hook.

For Regan Boychuk, an independent researcher who recently sat on one of the royalty review’s advisory expert panels, legal precedents once blazed the way for a super priority for environmental clean up in the oil and gas industry.

“There’s two very important legal cases, one very recent and one that’s 25 years old, and they both relate to an obscure legal concept that you should all be very concerned about, called a super priority,” said Boychuk, speaking at the Action Surface Rights Association annual general meeting at the Heritage Inn last week. “It’s something we used to have in Alberta, and what it meant was the environmental clean up that’s left after oil and gas development had a super priority. It came first. It came before the banks, it came before the creditors. If you left a mess, it had to be cleaned up.”

Oil and gas companies were once held accountable for their environmental clean up responsibilities.

“In the old days, companies used to be legally responsible, the shareholders, the executives, were legally responsible for the mess they left behind, and if they couldn’t afford to clean up that mess, the government could go after the company that sold them those wells, and their executives, and their shareholders. That’s the way it should have been, a super priority to clean up the mess left behind,” said Boychuk.

The situation currently prevailing in the province’s oil and gas sector has strong similarities to another situation which arose in the late 1980s.

“We’re in a situation again today where the price of oil has declined significantly, and a heavily-indebted industry is struggling to stay afloat,” said Boychuk. “There’s a number of companies going bankrupt, not paying their lease payments, and that’s becoming an increasing issue again. We went through a very similar episode 30 years ago, in 1986 when the price of oil collapsed. All these same issues were a big concern in Alberta. Before that time, there was scarcely anything resembling environmental regulations in the oil patch. That’s the situation back in the late 1980s. Lots of companies were going bankrupt, lots of farmers started becoming concerned about what was being left on their property. In 1989, the regulator started publishing reports, how are we going to deal with this issue, how are we going to hold them to account, but there was so few rules they didn’t know what power they had. They didn’t even know if they could hold companies to account.”

A pivotal case which shook up the industry with regard to environmental liabilities was known as Northern Badger.

“So they decided to test their powers in court. They picked some court cases, and one of the test cases involved a company called Northern Badger. It was a little company, went bankrupt, owed a bunch of money, and creditors wanted to sell off the producing wells to pay themselves back. The regulator said whoa, you have seven wells that are unsafe and need to be safely sealed before you can sell that stuff off,” said Boychuk.

With a court victory and the implementation of a “super priority” to clean up old or abandoned well facilities, the future for well clean ups in Alberta was on the right track in protecting the environment, according to Boychuk.

“The industry wasn’t used to being told such things. The industry tricked the courts, ended up selling it off anyway, but the province kept fighting it in the courts. The decision in the Northern Badger case went to appeals, and Alberta won, and it established the principle that it doesn’t matter if you owe money to the banks, your licence says you need to return the land to a similar state than before you drilled, and you have do that. Before the banks get paid, you clean up anything we tell you to clean up. It was a very important precedent in Alberta. They tried to appeal it to the Supreme Court. The Supreme Court rejected it, never even heard the case, and so from that point on, that was the law of the land.”

The trickle down effect was immediate, but the honeymoon didn’t last long for energy regulators.

“That was the first time. It came as quite a shock to the industry, they didn’t like it, but there was nothing they could do about it. Legally they were now bound by it. By 1992, the Society of Chartered Accountants of Canada said all these new liabilities that you’re now responsible for, they’d better be on your year end reports, you need to show all these liabilities on your books, you need to take the hit to your revenue, you need to show your shareholders what you’re responsible to clean up. The National Bankers Association put out a report saying the banks should absorb all the credit risk for this stuff, there’s nothing much you can do about it,” said Boychuk.

Within weeks of the ascension of Ralph Klein to the premiership, the “super priority” precedent was already a thing of the past.

“But then Ralph Klein became the leader of the PCs, and virtually within weeks there was no more super priority. They stopped enforcing it, that was the end of it. He came into office, and instead he promised the Orphan Well Association, which was a tiny bit of money for the handful of companies that eventually disappeared, and the handful of wells that they left. They didn’t have to reclaim them back then, they just had to abandon and seal them. That replaced this super priority,” said Boychuk. “Back then we had a 100,000 wells that weren’t exempt from the good old days before there were any rules. Today we have 450,000 wells, and there hasn’t been any regulation. In 2000, Ralph Klein removed the liability for the shareholders and executives, so we can no longer hold them accountable.”

A second legal precedent reached last year, known as Redwater Energy, could have huge and far-reaching environmental clean up implications for all provinces and industries, not just Alberta.

“The second case happened just last year, when it was decided in March 2016 involving a company called Redwater Energy. It was essentially all the same issues as the 1991 case involving Northern Badger. The company went bankrupt, they owed $5 million, they had 20 wells that still produced oil and gas, and they had 100 old wells. The company, ATB, the provincial bank that lent them the money, they informed the regulator that those 100 old wells — those aren’t ours, that’s not our problem, we’re just going to take the 20 producing wells and we’re going to sell those off and pay ourselves back,” said Boychuk.

Defeated in court, Boychuk asserts the precedent set by Redwater Energy will be problematic for the future of provincial environmental regulations.

“The regulator didn’t like that too much, breaks all the rules here, but they took it to court, and the exact opposite decision than we had in 1991 — because of changes they made to bankruptcy law in 1997 — the oil company and the bank won this time. They said you’re allowed, under federal bankruptcy law, to abandon those 100 old wells. You don’t have to clean them up. You can just take whatever is valuable, sell it off, pay yourself back.”

Boychuk described what is now essentially a wild west of environmental regulation regarding clean up, where oil and gas companies can simply ignore their liabilities in light of legal precedent.

“That’s the situation that we’re in today, where those changes to the federal bankruptcy law allows them to disown contaminated land. That’s what all the oil and gas wells in Alberta represent, and despite what all of our rules say, despite 100 years of regulation that we have here that says they have to clean it up — they were perfectly aware of it from the moment they got their licence — there’s no longer anything the province of Alberta can do. They rely on this little change in federal law, and that’s the basis for exempting themselves from all of our provincial regulations. There’s nothing we can do to force them to clean it up anymore. They can sell off whatever’s of value to pay back the banks, but regular Albertans — our government — can no longer enforce our environmental regulations.”

Vast numbers of abandoned oil and gas wells, facilities and pipelines in the province are now hovering in legal limbo as to who is responsible for their clean up, adds Boychuk.

“There was a very brief moment where we had the power to hold them to account to clean up their mess, but with this Redwater Energy decision, it effectively and explicitly brings that to an end. There are hundreds of thousands of old oil and gas wells in Alberta, there are hundreds of thousands of kilometres of pipeline, and there isn’t any money set aside to clean any of it up.”

The Redwater Energy decision means trouble on the way in taking recalcitrant industries to the cleaners, asserts Boychuk.

“It’s a very troubling situation that Albertans should be very concerned about. But it doesn’t just apply to Alberta. This federal bankruptcy law trumps all provincial legislation. This same thing applies to every polluting industry across Canada — gold mines, power plants — if they go bankrupt we can’t make them clean anything up. It gives an incredible incentive to companies to run themselves into the ground, to loot every bit of money they can, and to make as big a mess as they can before its all over, because they can walk away from any mess.”

The Redwater Energy decision is currently being appealed, but Boychuk was not positive about the prospects.

“It’s very unlikely that the province is going to win. It’s not entirely for sure that the province will appeal it to the Supreme Court, but that’s where it needs to go to sort these things out if Albertans are going to be protected.”