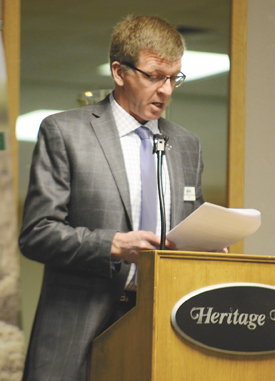 The year 2016 was a year of transition for the Alberta Sugar Beet Growers (ASBG), with significant turnover on the organization’s board and a new executive director taking over the administrative reins.

“A successful harvest manifested into record yields and good returns for producers,” said president Arnie Bergen Henengouwen at the ASBG’s annual general meeting last month at the Heritage Inn. “The grower association, on the other hand, has had a bit less serene experience in 2016. When we left this meeting last year, it was clear it would be a year of flux for this organization. A major rollover in board members, an open executive director spot, new president, and a grower body clearly looking for change presented a very immense challenge for ASBG in 2016.”

“As you will see, our board has been hard at work addressing the issues put before us. One of the biggest pieces of work has been the updating of our vision, mission and strategic plan. I have to say that when we start talking strategic planning, you get the glossed over looks. In early November, the board spent a day — a very productive day, and I’m really pleased with what came out of it — the result of that is an updated mission statement and vision statement. I feel that we as the board have made good progress in positioning ourselves so we can take the action needed to sustain our vision.”

Many of the issues the ASBG confronts on an annual basis remain largely the same, according to Bergen Henengouwen, but that doesn’t mean they don’t require renewed vigilance.

“I’m confident that we have the blueprint in place so we can utilize the collective wisdom around the board table, and provide stability and confidence in our industry going forward. The energy around the board table is very good. It’s good to work with people who are on the same page. I look back on the annual reports over the years, and many of the issues we must be aware of and ready to act on remain the same. Trade issues, government policies, and marketing conditions will always — and will continue — to be on the radar for the ASBG board.”

Proving the sustainability of the industry to critics will be a focus for the ASBG as it moves forward in 2017.

“However, there is one emerging issue that we, not only as beet growers, but agriculture in general, are being called to action on. That’s consumer transit demands. We are being challenged to defend our agronomic practices and the products we produce as safe and sustainable. We as a board have engaged in discussions with organizations that can help educate ourselves, and our consumers, to the fact that what we produce is safe and sustainable for all involved,” said Bergen Henengouwen.

Delivering the Marketing Board report, Gary Vucurevich noted the ASBG has been hard at work in 2016.

“It has been a busy 12 months for the board. In spite of some challenges, we have accomplished a great deal in our quest to advance the interests of our growers.”

In his Factory Committee report, Ian Harris discussed a slowdown of the slice due to sugar storage issues.

“The reason behind why they wanted a slow down was so all the sugar storage wasn’t full, and that would have stopped the slicing completely,” said Harris. “Thus far, the campaign has seen pretty minimal downtime, and one of the biggest issues that they’ve had to deal with was the Roberg dewatering screen. They were down, I believe, about eight hours for that.”