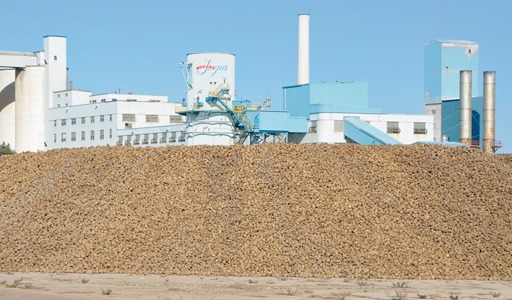 Alberta’s 2016 sugar beet yields averaged a record 28.68 metric tonnes per acre as part of a high-quality crop which posted 19.31 per cent (17.79 per cent extractable) sugar produced.

“With the strong start to the season, most growers were pretty optimistic about the potential for a good crop,” said Gary Vucurevich, who delivered the Agriculture Committee report at the Alberta Sugar Beet Growers (ASBG) annual general meeting at the Heritage Inn on Feb. 8. “However this optimism was soon tempered by dark storm clouds threatening, almost daily in certain areas. In all, 2,146 acres received hail — some multiple times — with the most damaging storms passing through the Picture Butte area.”

For the 2016 growing season, planting in Alberta began around April 15, and carried on until roughly May 5. Some 28,644 acres were planted in total, with 189 replanted due to wind damage and herbicide carryover.

“The weather cooled off in late August, and continued through the better part of September, the prospect of an early beet harvest began to look as though it might conflict with finishing harvesting other crops, as maturity was delayed on pulses, corn, and other crops. The beets, however, continued to grow and use water practically as fast as growers could apply it,” said Vucurevich.

Soil conditions were generally dry, and irrigation commenced immediately on most farms as water became available, which produced good stands in most fields. Early harvest began on Sept. 15, with five of seven receiving stations open.

“Growers who had finished combining, and others who hadn’t finished combining, were able to lift and deliver beets,” said Vucurevich. “Many of these growers reported amazing yields for this time of year. In total, over 110,000 tonnes of beets were delivered in September, representing about 13 per cent of the total crop.”

Temperatures were below those experienced in 2015, but there was still warm days with fair sunlight. Row closure was generally complete by the last week of June, and there were minimal hail damage throughout the summer months. Summer temperatures produced warm, partially clouded days, which were short-lived through the harvest season, which saw cool, rainy weather, and snow.

The main harvest began in early October, although this was slowed due to an accumulation of rain and snow, which prompted the closing of the piling grounds in the second week of October. Harvest ended on Nov. 10.

“The main harvest started on Oct. 3, generally good if not somewhat dry conditions were common,” said Vucurevich. “On Thanksgiving weekend, a storm blew into southern Alberta covering fields with a thick blanket of snow, effectively halting all harvesting operations. Cold overnight lows, approaching -11 Celsius, threatened to freeze beet roots. The suspension of harvest left everyone wondering when and what we would be left with once we got back to digging, with the harvest of 2009 not too far back in everyone’s memory. Everyone’s patience was tested waiting for conditions to improve so that harvest could resume. The insulating blanket of snow proved to save the crop, and fortunately quality was not affected by much. The resumption of harvest on Oct. 17 seemed to bring more trucks into service, leaving many growers at receiving stations frustrated by long line-ups. Growers were determined to get the job of harvesting over with while they still had the chance.”

Harvest concluded in early November with a record average yield of tonnes per acre.

“Defoliators were adjusted to manage the anticipated growth of crops. In most instances, the defoiliation was as good or better than before the cold weather, and in total, 821,459 tonnes of beets went into storage in good condition. When harvest was concluded on Nov. 10, the overall average yield on 28,644 acres harvested was a record 28.68 tonnes per acre, with 19.31 per cent sugar. All growers should be applauded for their hard work and persistence producing this crop,” said Vucurevich.

Moving on to the research portion of the report, Vucurevich outlined some of the projects that were underway in the area during the growing season.

“The main research sites were located in Taber, Vauxhall, and Enchant. Twenty-four glyphosate-tolerant varieties and four non-herbicide tolerant varieties were tested in 2016. One new conditional variety, BTS 4420, was approved for 2017. Seed supplies, as you may know, will be tight for the upcoming season, therefore the joint committee has conditionally approved another variety which will only be used in the event of a significant recline. Other research conducted in 2016 included canola control and Roundup-ready sugar beet experiments, date of harvest, date of planting, late-season irrigation, up-beet herbicide injury, spring nitrogen strategies, plant population, phosphorus fertilization, and assessing variety improvement. A long list, and a busy crew. Complete research data for all of these experiments will be presented at the spring grower meetings.”

Seed variety approvals were streamlined, making it easier for producers to access the varieties they require.

Crop rotation strategies were reviewed, but evidence suggests the status quo provides the most advantages to local producers, according to Vucurevich.

“The joint committee also reviewed the canola-beet rotation policy. The scientific evidence from all North American beet growing areas shows very clearly that shortening rotations between host crops will increase beet-nematode pressure. The best way to prevent nematode infestation is to simply maintain a strict four-year rotation, like we’ve been doing. As a result, the joint committee does not desire a change to the canola-beet rotation policy, as current practice has proven to be agronomically sound.”