Clark claims he can remove Notley from office 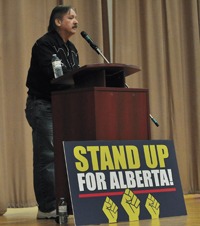 For George Clark, speaking out is a wish he continues to fulfill for the memory of his mother.

“Why did I get involved? I didn’t mean to. I was just an ordinary guy with a struggling construction company. October 18, 2014 was a very, very important day in my life because my mother was passing away after a lengthy illness. She had been in and out of the hospital for several months and by October 18, she had been in the hospital for a string of two straight months,” said Clark.
“Three days before she died she gave me a message.”

That message from the heart came in a moment of lucidity while she was dying: that everything Clark does, should be out of love. In another moment of lucidity as Clark stood with brothers and sisters with the their mother, she called him over and said ‘George, you have a lot of knowledge, but you haven’t been using it. You have to share what you know.”

And for what Clark knows in his view, Alberta was not in a very good place under the current stewardship of Premier Rachel Notley, and he decided to be as passionate in delivering that message as his mother was who earned the Order of Canada for work for aboriginal women’s rights.

Coming from a broken family, Clark had to help his mother as a 13-year-old make ends meet in Fort McMurray.

Clark has been hitting the campaign trail with plebiscites against the proposed carbon tax and Bill 6.

“WCB has led to numerous, numerous suicides. WCB has taken away the right of the worker to seek the protection of the independent courts. That is not a fair system. WCB takes a percentage of every premium and then forms a safety association so they only have to deal with one organization,” said Clark. “The bill that is in place destroys what has been the greatest thing in the world. That great thing in this world is the last bastion of free enterprise.”

Clark shifted his angst to the proposed carbon tax in which he noted Alberta has ample opportunity for prosperity because the provinces sits on the greatest resource in the world.

“Oil sands and heavy oil is absolutely the envy of the world,” said Clark. “In 2009, a group of 12 Canadian environmental leaders were invited to Washington D.C. by none other than Al Gore. They met with 22 American environmental conservation groups and on June 2, 2009, they signed a document amongst those leaders that called for the outright moratorium on any future infrastructure related to the tar sands,” said Clark. “They also called for the extraction of the resources to be shut down as quickly as possible. That is insane that we have 12 Canadian leaders going and doing that, but they did it willing.”

Clark noted a questionable connection in that decision was Gerald Butts, who is currently a senior political adviser to Canadian Prime Minister Justin Trudeau.

According to Clark, prior to his connection with Trudeau, Butts was a senior adviser to Premier Kathleen Wynne in Ontario.

“He was the architect of the wind farms across Ontario and we all know how far that’s gotten them so far,” said Clark. “It hasn’t got them off their reliance of other energy sources. All it’s done is triple their costs for electricity from six cents a kilowatt hour (kW) to 15-18 cents per kilowatt hour and it doesn’t even provide their power. Even at the best of times with 20,000 something windmills built, it only ever provides 20 per cent of the power. So after they shut down the coal power plants, they called it back up power and started building these expensive natural gas plants. Who pays for these? The rate payers and taxpayers. The people that cash in are the companies that rush in and build them. They get their money up front, they don’t have to wait for 25 years payback for them. Who owns those companies? The Ontario Teacher’s Pension Fund largely owns them, the unions own them. More specifically, they are all over managed by every single one of those 12 traitors that went down and signed that declaration to get us off fossil fuels. They are the ones making the money.”

Clark will be attempting to visit 50 Alberta communities before presenting his signatures on the plebiscites in question to the Lieutenant Governor of Alberta for the start of the spring session on Feb. 9. Clark claims he already has more signatures than the next largest gathering of signatures in a plebiscite by Friends of Medicare which had over 80,000 signatures back in 2002.

Clark’s petition asks people to sign in front of a witness and provide their address, which he argues should give it more weight than online petitions.

The Alberta Election Act allows for cabinet to ask the Lieutenant Governor to call for a plebiscite if they believe there is a significant public sentiment for it. The plebiscite would not be binding on the government.

Clark made a bold promise to people who attended the Stand Up for Alberta rally at the Taber Community Centre on Saturday that he has found a way to remove Premier Rachel Notley from political office come Feb. 9 when he is on the steps of the legislature.

“The plebiscites we are doing are very much legal. If the government refuses to run those plebiscites and then abide by the will of the majority of the citizens because Notley does not have the support of the majority of Albertans, she only has the support of the majority of the legislature. Close to 60 per cent of the population did not vote for her, and now she is proposing legislation that was not announced and publicized and run on to win those seats, so in my mind she is both an accidental leader of government and she is also at this point, proposing legislation that she did not publicly disclose. Without disclosure, she is an affront to democracy,” said Clark. “What we are doing with these plebiscites, is we are going to school her on democracy. She is already ignoring Westminster parliamentary tradition and democratic ideals and that cannot be allowed to stand.”

Clark claimed he is bipartisan and did not care which party people in the audience voted for at the provincial election.

“I just want people to find a voice and find a way for that voice to be expressed,” said Clark. “Every single election in Alberta, we have ended up with a majority government since 1905. There has never been a vote of non-confidence in the legislative assembly of Alberta. What I have said is if Madame Premier refuses to let the Lieutenant Governor represent our interests and order the holding of those two plebiscites, we on the steps of the legislature on Feb. 9, we will begin the process which will see her removed from the office of the premiership. They are all wondering what George has up his sleeve. Come with your friends and family, bring your kids, because it’s going to be a great moment in Canadian history…I shared my information with a couple of lawyers and not a single one of them has broke confidence. They have assured me, what I have planned is fully legal, fully democratic, it’s fully peaceful and it will result in the removal of Rachel Notley from office. Alberta is about to show the world how to properly exercise our democratic rights to control the leaders who attempt to control us.”

One response to “Clark claims he can remove Notley from office”