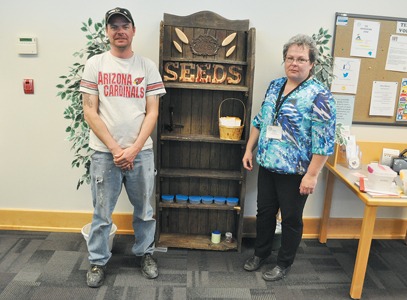 The Taber Public Library is now the proud home of a new seed library, and staff are hoping the idea will take off with local horticulturalists and hobby gardeners.

Popular in many U.S. public libraries, a seed library is an institution that lends or shares seed and disseminates them to the public which preserves the shared plant varieties through propagation and further sharing of seed.

Library employee Dawn Kondas explained the “seed” of the idea had been planted in 2011, when she read an article on seed libraries in the United States. Years later, this idea eventually flowered into fruition when local hobbyist Jason Wilms agreed to construct a wooden wall case to house the seed library.

“I thought about it for a while, and I knew that Jason (Wilms) was in to building stuff, and I just put two and two together, and that’s what we came up with,” said Kondas. “It’s a new idea that libraries are doing.”

Seed libraries usually maintain their collections through donations from members, but may also operate as pure charity operations intent on serving gardeners and farmers. A common attribute of many seed libraries is to preserve agricultural biodiversity by focusing on rare, local, and heirloom seed varieties.

“What I’m trying to do is get people to borrow seeds, and then return seeds,” said Kondas. “The Taber Plant Exchange Group, I know there’s an agronomist involved with that, and his specialty is heirloom seeds. Alan Makarchuk, who grows giant pumpkins, he’s going to be bringing some seeds down, too. There’s some in there now, and it’s just leftover seeds in the packaging. Anybody that wants some seeds can come. It’s basically just on an honour system. We’re hoping that people don’t just come and take seeds and then not bring anything back.”

While “lending” is straightforward, “returning” or re-depositing seeds can present a challenge, since new seeds are not necessarily well-described, and may be inadvertent hybrids.

Seed libraries complement preservationist activities by collecting local and heirloom varieties that might otherwise be lost, and by collecting new local varieties. In theory, lending and returning seed libraries will also promote local agriculture over time, by growing collections of seeds locally adapted to the region.

“I think there’s a lot of people in Taber that are interested and grow their own gardens,” said Kondas.

The seed library itself, which was constructed and donated by Wilms, features weathered barn-style wood, among other accoutrements.

“It’s my great-grandpa’s chicken coop door,” said Wilms.
“Dawn (Kondas) asked me to build a shelf, but I had a vision of doing something like that, (but) more rustic.”

Wilms went on to note working with weathered or semi-rotted wood often presents a series of challenges for the amateur carpenter.

“Often things aren’t straight, and you have to improvise as you go, as you build it. If it’s really rotted, I try to get rid of it, not use it, or work around it.”

Before being approached by Kondas, Wilms had one of his own projects in mind for use of his “inherited” wood, but chose to create and donate the seed library in the knowledge that it would remain a feature at the public library for years to come.

“I used my great-grandfather’s door on it, but it was going to a library, so it didn’t bother me because I was donating it. I wanted to use it on something of my own, but I know it’s not just going to get tossed aside or thrown out.”